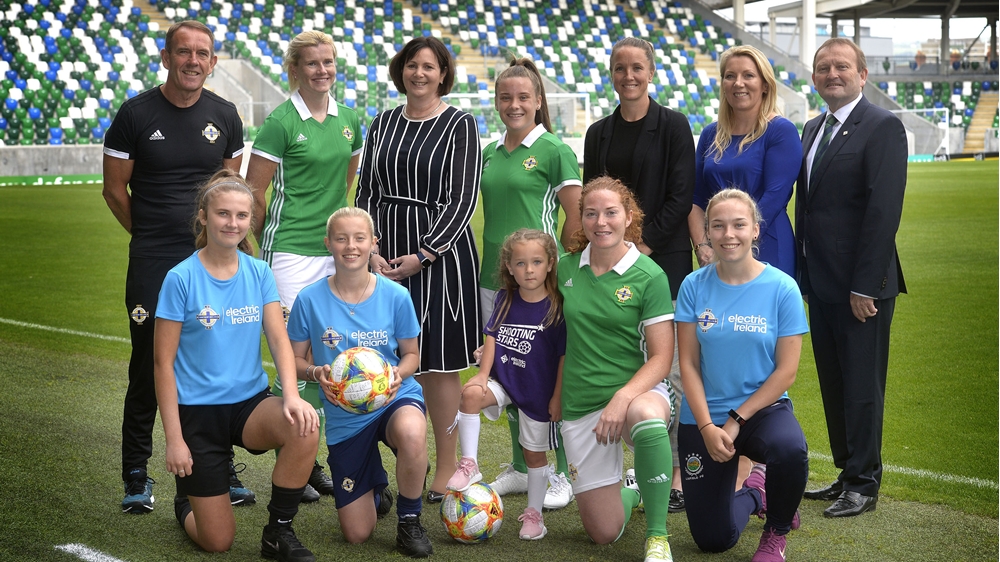 Manchester United Women first team coach Casey Stoney has said only an integrated approach like that being taken in Northern Ireland will help women’s football continue to make strides on the global stage.

Stoney was speaking at a media event in the National Football Stadium at Windsor Park where Electric Ireland and the Irish FA announced a further expansion to their partnership.

The expanded tie-up will see the energy provider become the title sponsor of the Northern Ireland senior women’s international team as part of a broad commitment to women’s football.

In addition the company is lead sponsor for women’s and girls’ grassroots football and competitions like the Electric Ireland Women’s Challenge Cup and Schools’ Cup as well as the Shooting Stars initiative which encourages girls aged four to seven to play football.

Stoney, who was the special guest at the event in Belfast, said: “The women’s game is now in a fantastic place globally. The growth of the game in Northern Ireland comes from the dedication of those involved from grassroots right up to the highest level.

“Only with a complete and integrated approach to women’s football will we see it continue to make the significant strides it has made in recent years and it’s fantastic to see the comprehensive structures now in place to see that hope become a reality.”

In Northern Ireland participation rates have grown exponentially over the last few years with 10,000 girls and women now playing football every week.

That figure has risen by 25% over the last two years alone according to statistics collated by the Irish FA and Electric Ireland and it is the belief of Clare McAllister of Electric Ireland that it is the integrated approach across the various strands of women’s football that seems to be paying direct dividends to the game’s growth.

She said: “Adding the Northern Ireland senior women’s team to our partnership with the Irish FA is a significant milestone for women’s football in Northern Ireland and completes a game-changing player pathway that starts at age four and is now supported at every level, culminating at the highest possible level.

“We’re extremely excited about the movement that is being built locally to transform the women’s game and we are incredibly proud to be an integral partner of that.”

Irish FA President David Martin said: “We have made significant steps in recent years to get the women’s game here to a place where it is competitive on an international stage.

“The benefit of having a sponsor willing to commit to a broad range of support across women's football in Northern Ireland cannot be underestimated and we will continue to work with Electric Ireland to grow the game further in the years to come.”

Kenny Shiels, senior women’s team manager, noted: “The development of the women’s game in Northern Ireland has been remarkable over the last 10 years.

“The quality of players and coaches alike is increasing year-on-year and the interest in the game will only continue to grow, inspiring the next generation of young players.”

Image: Manchester United Women first team coach Casey Stoney (centre) was the special guest at the event where Electric Ireland and the Irish FA announced a further expansion to their partnership.