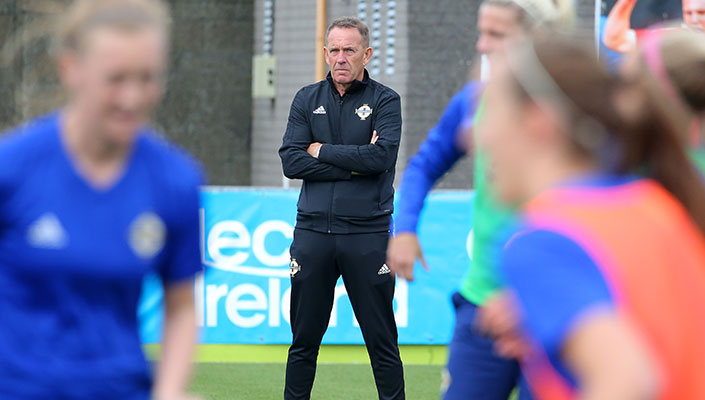 It's a new era for Women's Football across the world and it's no different in Northern Ireland as manager Kenny Shiels prepares for his debut as international manager.

The opening game of our UEFA Women's Euro qualifying campaign against World Cup quarter finalists Norway at Seaview on 30 August at 7:45pm will be his first in the Northern Ireland dugout.

Shiels has many regular faces to call upon with the likes of striker Simone Magill, midfielders Rachel Furness, Marissa Callaghan and Sarah McFadden as well as defenders Julie Nelson and Ashley Hutton all featuring in his first competitive squad.

He will be without Brighton and Hove Albion defender Laura Rafferty who suffered an ACL injury whilst with her club and will be a miss to the squad.

However, there are several faces who will have the chance to make an impact in place of the injured Rafferty such as Leicester City's Natalie Johnson and Crystal Palace captain Freya Holdaway.

The two sides are very familiar with each other after being drawn in the same group for the 2019 World Cup qualifying campaign with Norway coming out the victors on both occasions.

The first game saw a 4-1 win for Norway on their home soil followed by a 3-0 win at Shamrock Park in Portadown in April of last year.

National Team Manager Martin Sjögren has an experienced squad to pick from with four players on over 100 caps and several more over 50.

He also has some star names to select in the likes of FC Barcelona star Caroline Graham Hansen, Maren Nævdal Mjelde of Chelsea Women and VfL Wolfsburg player Kristine Minde.

Graham Hansen leads the way in terms of goals in the squad with 26 in 77 appearances followed by the experienced Elise Hove Thorsnes who is on 19 goals in 118 caps.

Prices for the game are £5 for adults, £3 for juniors and Campaign Card holders get in for free. All tickets have to be purchased on the gate at Seaview.

You can hear from manager Kenny Shiels in the video at the top of the page.