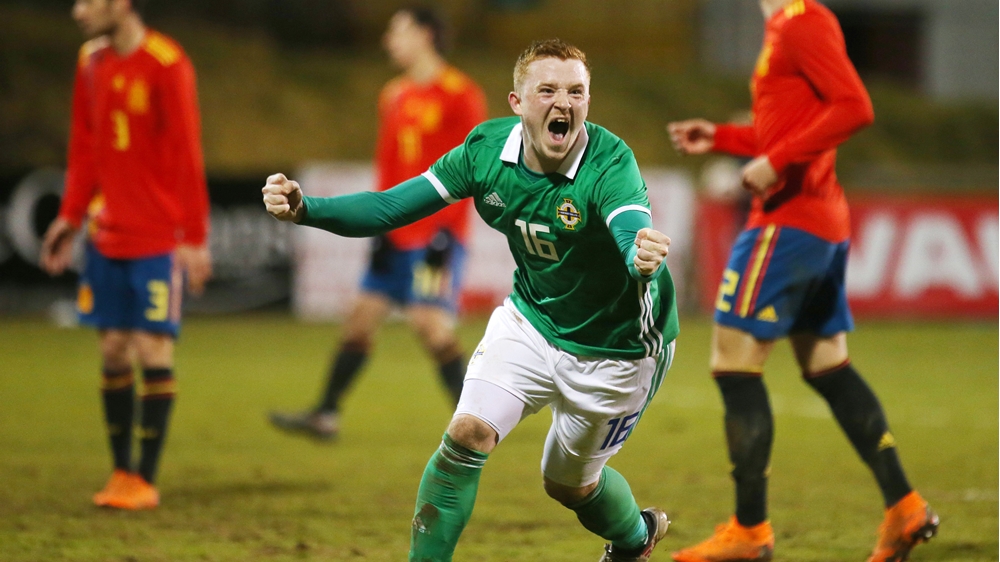 Linfield striker Shayne Lavery has been called into the Northern Ireland senior panel for the forthcoming games against Luxembourg and Germany.

Lavery had been due to join up with Northern Ireland’s U21s for games against Malta and Finland, however Northern Ireland boss Michael O’Neill has instead promoted him to the senior set-up.

The former Everton player replaces Wycombe Wanderers forward Paul Smyth, the ex-Linfield player, who has been ruled out of both games after picking up a foot injury.

Lavery’s elevation to the 25-strong senior squad is a reward for his excellent performances with Linfield in Europa League qualifiers in particular.

The young striker scored again in Europe last night as Linfield narrowly lost out 2-1 to Qarabag in Azerbaijan in the second leg of a Europa League qualifier.

And he scored twice for the Blues against the same opposition last week. Linfield won the first leg at Windsor Park 3-2, however last night’s result meant they exited the European stage on the away goals rule.

At the squad announcement earlier this week Michael O’Neill said he been impressed by Lavery this season and especially his performances in Europe.

Northern Ireland face Luxembourg in a challenge match at the National Football Stadium next Thursday (5 September) before tackling Germany at home in a Euro 2020 qualifier on Monday 9 September.

Lavery will no doubt be hoping to add to his one senior cap for Northern Ireland to date. It came in the game against Panama during last year’s Central America tour.