Liam Donnelly makes it six goals in five for Motherwell 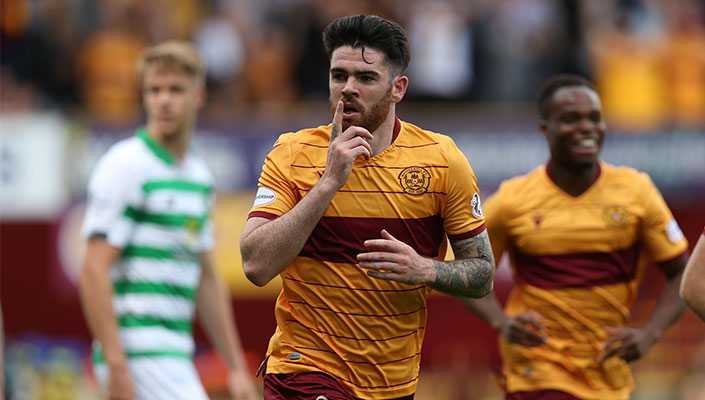 Midfielder Liam Donnelly’s stunning start to the season continued when he scored twice for Motherwell as they suffered a 5-2 at home to Champions Celtic at the weekend.

The former Fulham trainee, who holds the record for the most appearances at under-21 level for Northern Ireland, has now scored six goals in just five outings this term for Stephen Robinson’s outfit.

The one-time Dungannon Swifts youth started out as a defender, but this season Robinson has deployed him in a midfield role which he admits he is relishing.

“The gaffer knows I have the qualities to play in there and with players leaving, I’ve had my opportunity,” said Donnelly.

“Changing position has allowed me more freedom to get forward, I know I have a decent shot but I now have the platform to show that by playing in a different position.”

The new Premier League campaign in England got underway over the weekend and it was a special occasion for two of our players, Ollie Norwood and Jamal Lewis.

After three successive promotions with Brighton & Hove Albion, Fulham and his current side Sheffield United, 28-year-old Norwood finally realised his dream of playing in the top flight when he skippered the Blades in their 1-1 draw at AFC Bournemouth on Saturday.

It was a slightly more testing Premier League debut for 21-year-old left-back Jamal Lewis though as Norwich City went down 4-1 to a rampant Liverpool side at Anfield on Friday evening.

Jonny Evans’ Leicester City were held to a scoreless draw at home by Wolves while Watford, who had Craig Cathcart at the heart of their defence, were beaten 3-0 at Vicarage Road by Brighton & Hove Albion.

Elsewhere winger Gavin Whyte made his first start in a Cardiff City shirt as the Bluebirds chalked up a 2-1 home win over Championship new-boys Luton Town.

Midfielder Ben Reeves came off the bench to make his debut for MK Dons who defeated Shrewsbury Town 1-0 at home while Caolan Lavery, who joined League Two Walsall last week, made his first appearance for the Saddlers in their away draw at Forest Green Rovers.

In Scotland, Steven Davis chalked up his second assist of the season as Rangers ran out 6-1 winners over 10-man Hibernian at Ibrox.

Meanwhile, Hearts, who had Conor Washington and Michael Smith in their starting line-up, are still without a Premiership win after being held to a goalless draw at home by Ross County, a result which saw the home support vent their frustration at the final whistle.

“They’ve got every right to be frustrated,” said Washington, “They and us think we should be winning that game.

“We should have had more than enough to have done that. No disrespect to Ross County but at our place we should be dominating and winning games of football.

“If I’m honest, I played in front of some tough crowds in England so I don’t think the fans were too bad on Saturday. They were right in giving us the reaction we got.”