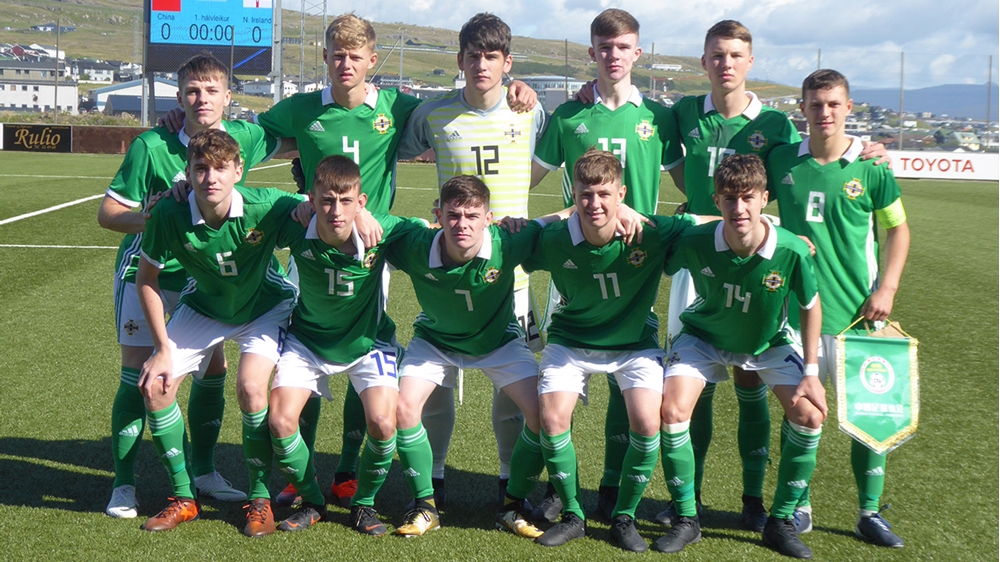 Northern Ireland's U17s completed their Nordic Cup adventure in the Faroe Islands with a comfortable win against China.

The U17s, who had produced some good performances despite losing to Denmark, Sweden and Finland in the group stages of the tournament, started the play-off for seventh/eighth place on the front foot.

And the boys in green took the lead in the sixth minute when a Darragh Burns free-kick from the right found the unmarked Chris McKee inside the six-yard area and he headed home.

Northern Ireland failed to capitalise on the early lead, however, and they struggled to break down a resolute Chinese defence. It wasn’t until after the midway point that another chance fell their way when a Burns effort went over the crossbar.

Following a good break on the half-hour mark the Chinese side could have equalised but for a good save from Conner Byrne.

The lead was doubled three minutes before the interval when Peter McKiernan dispossessed a defender and ran at the Chinese defence before squaring the ball for McKee to slot home his second of the match.

The early stages of the second half saw some decent combination play between McKee and McKiernan which in the end came to nothing. The next chance of the game fell to Barry Crowe-Baggley whose effort from a McKee cross was pushed around the post for a corner by keeper Zhengkai.

Midway through the half Micheal Glynn had an opportunity to extend the lead for Stephen Frail's side but his effort found the side netting.

Minutes later McKee had an opportunity to complete his hat-trick when, following a great break by Carl Johnston, he blasted over when in a good position. Almost immediately though Jack Scott added a third following good link-up play with Charlie Allen when he fired home from an acute angle.

Ten minutes from time Scott had a chance to get his second of the match when a Ben Wylie pass found him but his effort was blocked.

A couple of minutes before the end China scored a consolation when a long range effort evaded keeper Byrne.

The tournament staged in the Faroes has proved very good preparation, against strong sides, for the upcoming U17s European qualifiers in Turkey in late October where they will play Slovakia, San Marino and the hosts.