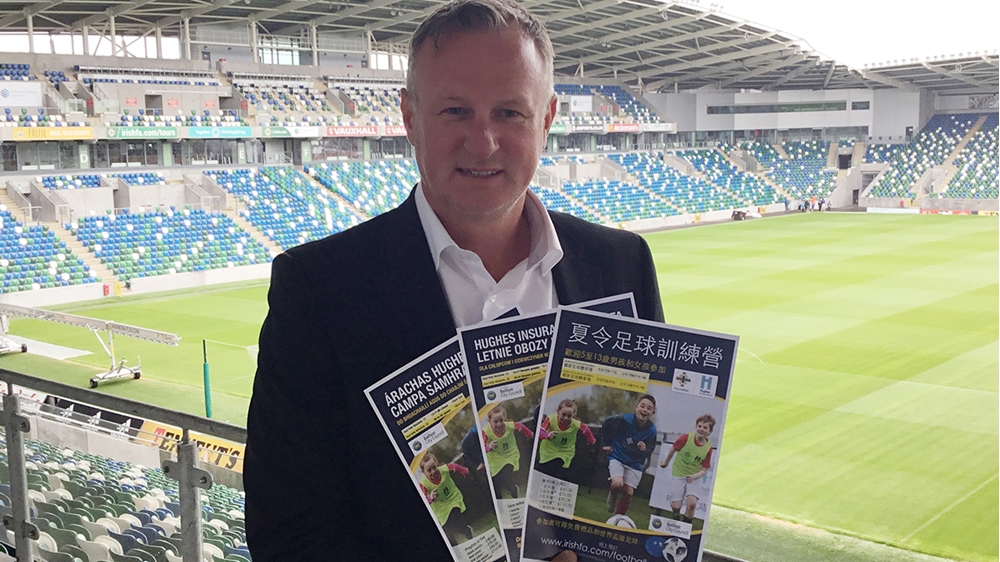 The Irish Football Association is reaching out to children who do not use English as their first language in a bid to encourage them to attend football camps in Belfast this summer.

The association is staging two week-long camps - they are sponsored by Hughes Insurance - at the new-look Olympia Leisure Centre, in the shadow of the National Football Stadium at Windsor Park, later this month.

It has just distributed flyers in the Irish, Chinese and Polish languages inviting kids who live close to the stadium to come along to what will be the first camps staged at the new 3G pitches at Olympia.

Aimed at children aged five to 13, the Hughes Insurance sessions encourage kids to both enjoy the game and improve their skills. Topics covered include ball mastery and turns, dribbling, passing, shooting, defending and attacking, running with the ball and small-sided games.

Michael Carvill, the Irish FA’s Volunteer Development and Policy Officer, and Andrew Waterworth, the association’s Club and Community Development Officer, will be leading the camps at Olympia.

Michael said: “These leaflets form part of our community outreach work in areas close to the stadium.

“Within a two-mile radius of the ground you will find Irish, Chinese and Polish speakers and we are keen to engage with all of our neighbours.”

Andrew added: “The leaflets have only been in circulation for a few days and we are already seeing an increased uptake for places on our camps at Olympia, which is great.”

For more details on the camps at Olympia – they run from August 13-17 and August 20-24 – and other football camps at numerous venues across Northern Ireland log on to www.irishfa.com/footballcamps.

Image: Northern Ireland manager Michael O’Neill with the leaflets in the Irish, Chinese and Polish languages.