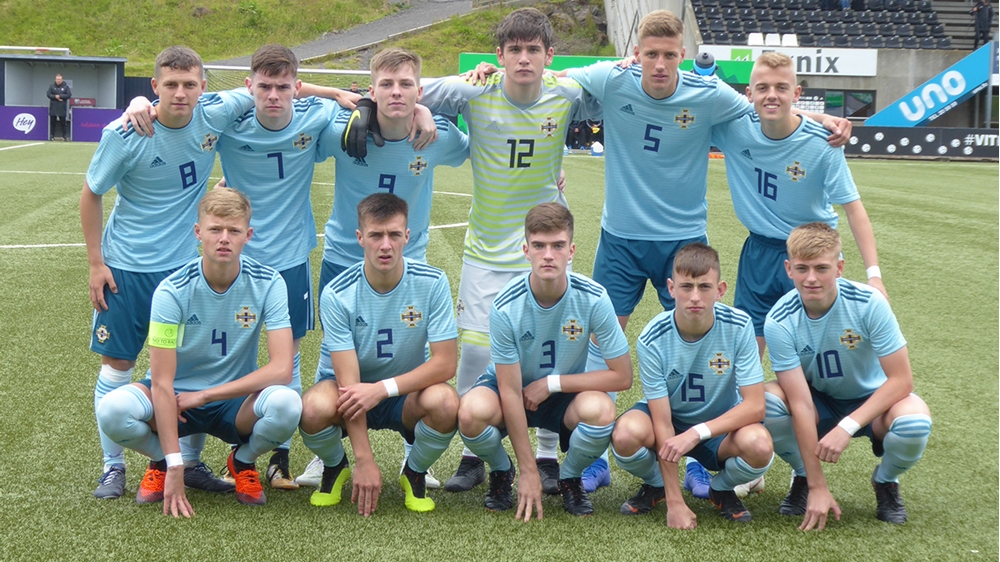 Northern Ireland U17s lost 1-0 against Denmark despite an encouraging display at the Nordic Cup in the Faroe Islands.

Manager Stephen Frail made only one change in the starting line-up from the team which performed well in their opening match in the tournament, with Conner Byrne replacing David Walsh in goal.

The Danes had a half-chance when an effort went just wide of Byrne’s left hand post.

Midway through the half a Darragh Burns free from just outside the box was well saved by Danish keeper Jungdal.

The lively Peter McKiernan was again a constant threat down the right but his efforts failed to produce any clear-cut chances.

A minute from the interval keeper Byrne had to be alert to make a good stop with his legs and almost immediately Northern Ireland launched a swift counter attack only to see Jack Scott’s effort go wide of the post.

The Northern Ireland youngsters made a bright start to the second half with a Sam McClelland header from a corner finding Chris McKee who was unfortunately unable to keep his volley down.

In the early part of the second period Conner Byrne was only called upon once to make a fairly routine save from a Danish effort from just outside the area.

Northern Ireland then enjoyed a spell of domination. Burns picked the ball up deep before running at the Danish defence and firing in a shot, however Jungdal made a fairly comfortable save. A couple of minutes later Burns was thwarted by the keeper from close range and McKee’s header from the rebound was cleared off the line.

The Danes took the lead against the run of play just before the midway point of the half when, following hesitancy in the defence from a corner, substitute Agerbaek scrambled the ball home.  Moments later the Danes could have doubled their lead following a mix-up in the Northern Ireland defence but the ball was eventually cleared for a corner.

Northern Ireland U17s gradually wrested back control of the ball and created a number of dangerous attacking moves. A McKiernan effort was cleared by the defence and substitute Ben Gallagher fired an effort just wide of the upright.

The team again finished strongly with Gallagher latching on to a loose pass in the Danish defence in the final minute only to see his shot go past the post. In added time substitute Aidan Steele had the final chance of the match when he fired over from just outside the box.

Next up for the Under-17s is a match against Finland on Thursday.