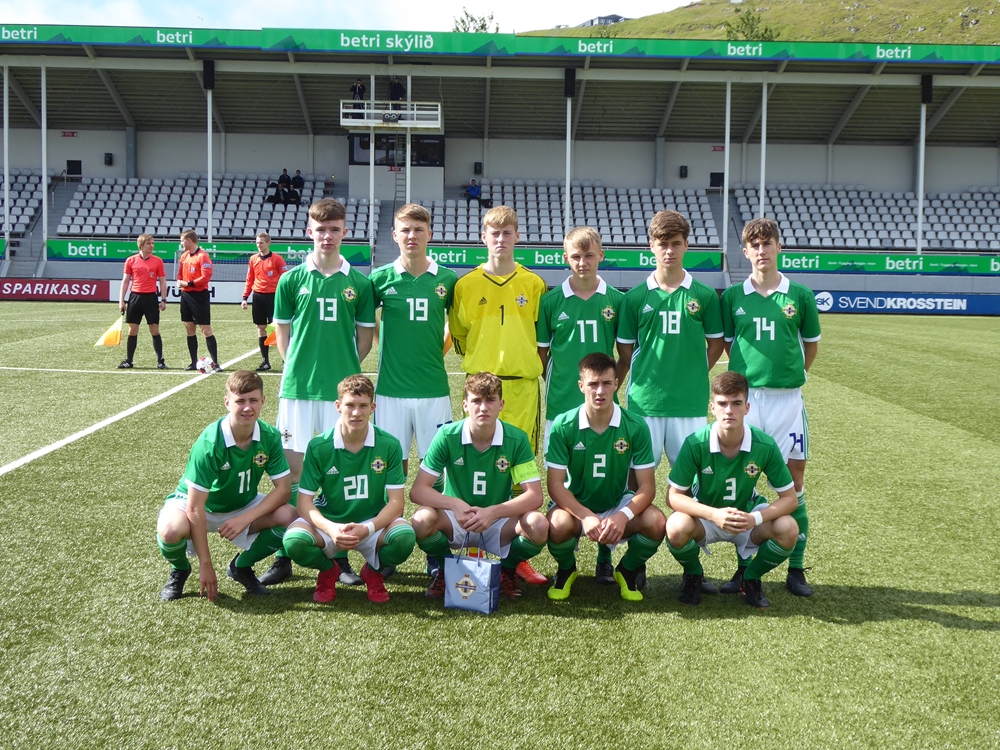 Northern Ireland’s U17s lost out to Finland in their third and final group game in this year’s Nordic Cup.

Stephen Frail’s side produced another decent display in the tournament staged in the Faroe Islands, but the Finns were more clinical in front of goal and ran out 3-1 winners.

Having played two matches in three days – against Sweden (L 2-0) and Denmark (L 1-0) – the Northern Ireland U17s boss made eight changes for the final group match.

Some of the changes were enforced. The lively Peter McKiernan was suspended having picked up two yellow cards and a couple of other players were carrying slight injuries.

However, it meant all of the players were given an opportunity to cement their places in the squad ahead of the upcoming European qualifying matches due to take place in Turkey in late October.

Finland, who had defeated Sweden 4-1 in their previous match, were put under early pressure by Northern Ireland, the main threat coming from Ben Gallagher and Charlie Allen running at their back line.

The opening quarter was dominated by Northern Ireland, however they did not create any clear-cut openings.

With their first real attack of the match Finland took the lead on 22 minutes. Adam Marhiev was allowed to run at the centre of the defence before firing an unstoppable shot past David Walsh into the roof of the net.

The response from Northern Ireland was almost immediate when Charlie Allen’s rasping effort found the back of the net via the inside of the post.

Just before the half-hour mark Walsh made a fine save from Finland centre forward Eetu Rissanen.

Northern Ireland finished the half strongly with Gallagher just failing to get good contact with his head from an excellent Barry Crowe-Baggley cross and a minute later a fine through ball found Allen whose cross was just slightly ahead of Gallagher.

At this stage of the match Allen was causing the Finland defence all kinds of problems with his excellent runs.

The final action of the half saw a Jack Scott header go wide of an upright.

Northern started the second half brightly but crosses from either flank failed to find their target. A driving run by Gallagher involving good inter-play with Gerard Storey came to nothing.

Finland had their first real effort of the half 15 minutes in with a shot from distance that was off target. A minute later Gallagher flashed the ball wide after taking on a couple of defenders.

The Finns went up the other end almost immediately and were awarded a penalty when Naatan Skytta was adjudged to have been fouled in the area. He took the penalty himself and scored to give his side the lead once again.

Four minutes later the match was all but over as a contest when Rissanen latched on to a long ball which deflected off a defender’s head and he stroked the ball home.

To their credit the Northern Ireland youngsters continued to make openings. Allen shot wide following good hold-up play by substitute Chris McKee and a Crowe-Baggley free from just outside the box was saved by Finnish keeper Matias Niemela.

The match ended on a disappointing note when Euan Deveney was sent off. He was slightly unfortunate to pick up a second yellow card in the final minute.

The result meant Finland made it through to Saturday’s final, while Northern Ireland’s Nordic Cup campaign will conclude on Saturday with a play-off against China.