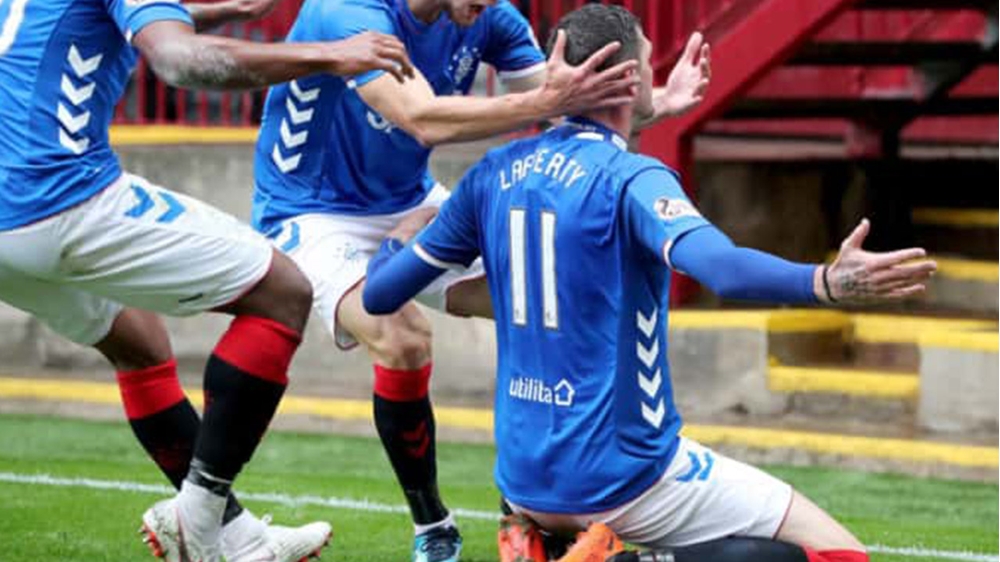 Despite scoring twice on his first start since his return to Rangers, striker Kyle Lafferty had to be content with just a point as Motherwell hit an injury time equaliser in a thrilling encounter at Fir Park yesterday.

The 30-year-old struck twice in a pulsating first-half to give the Gers a 3-2 advantage at the break, but Stephen Robinson’s side snatched a deserved point with Paul Hartley’s goal right at the death.

Rangers boss Steven Gerrard was disappointed to drop two points but he was pleased with Lafferty’s goals and his blossoming strike partnership with Alfredo Morelos.

“I though Kyle and Alfredo linked up really well today,” said Gerrard, “and he got his rewards with his two goals.

“That’s the reason I brought him here, he is a big player for us - we knew he was capable of scoring important goals and a volume of goals in this league.”

Elsewhere in Scotland, veteran Aaron Hughes was ruled out of Hearts’ victory at Kilmarnock with a calf strain though Michael Smith was in the starting line-up with teenager Bobby Burns on the bench.

Full-back Lee Hodson, who joined the St Mirren on-loan from Rangers last week, failed to get off to a winning start with his new employers as the Buddies’ went down 2-0 at home to Livingston.

In the Championship in England, Conor McLaughlin made his first league start of the season for Millwall who lost 1-0 at Rotherham United yesterday, however, absent from the Lions’ midfield was playmaker  George Saville, who was still recovering from the effects of concussion he suffered in midweek.

Goalkeeper Bailey Peacock-Farrell kept a second clean-sheet of the season as Leeds United went back to the top of the Championship on goal difference following their comfortable 3-0 victory at Norwich City, though former Crusaders’ man Stuart Dallas again missed out with a thigh strain.

In the National League, former under-21 winger Sean Shields scored twice for Ebbsfleet United in their 3-1 success over Aldershot whose consolation goal came from another ex-under-21 international Matt McClure.

Also in the National League, midfielder Dale Gorman, who was released by Stevenage in the close season, made his debut as a substitute for Leyton Orient in the 1-1 draw at Gateshead at the weekend.

Finally, Northern Ireland under-17 goalkeeper Ollie Webber has joined Whyteleafe FC, who play in the Isthmian League, on-loan until January.

The former Glentoran youth netminder, who kept a clean sheet on his debut for the club in midweek, was an unused substitute for their FA Cup tie with Saltdean United on Saturday.