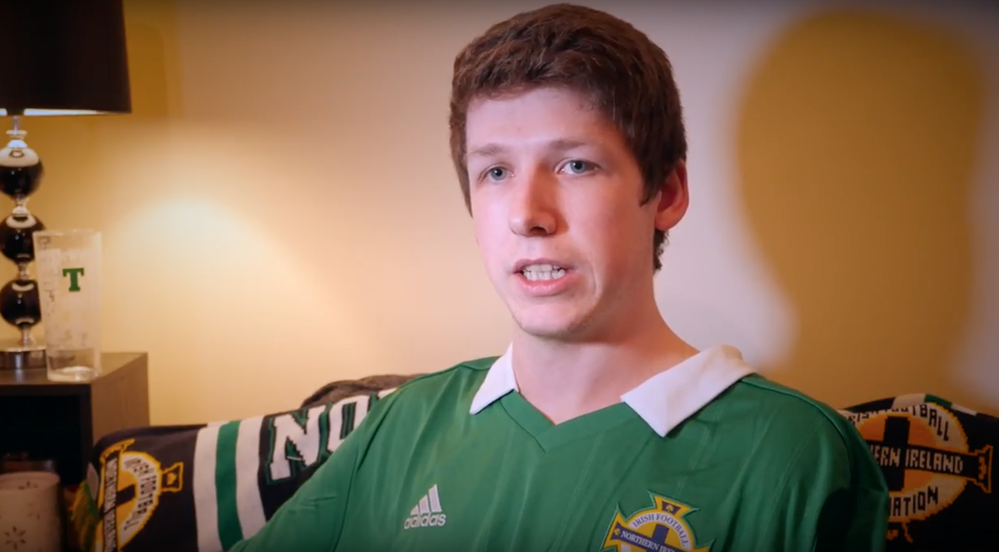 In 2011 Justin Guiney lost his arm at the age of 21 and has been adapting to maintain his love of football ever since.

He told us: “It’s an honour to be named Fan of the Month for July, I’m truly over the moon. I still remember my first Northern Ireland game v Portugal, in 2005. It was actually the first football match I had ever went to see, I was hooked.

“I’ve already got my tickets to the upcoming games, there’s not much that will stand in my way from getting to the matches now.”

Northern Ireland take on Bosnia & Herzegovina in September in the Nations League and Justin believes it’s a competition to be excited about: “I think the campaign card sales say enough about the new Nations League system, with 98% of cards being renewed.

“No-one wants to miss these games, all the games matter now and it’s clear the GAWA, which includes myself, want to be there to cheer the boys on.”

He joined the Irish Amputee Football Team in 2015 and remains to be the only member of the squad currently living in Northern Ireland.

He said: “After an accident such as mine whereby you are left with a permanent impairment, you instantly start thinking about everything you are now excluded from, it’s a very negative way to view things, but that’s what happens.

“When you’re able to get back to do the things that you did before the accident, your mind set changes, you start to realise, if I can still do this, then surely I can still do that. This is what football did for me, my friends urged me to join in with local 5 a side games, they refused to accept when I said I didn’t want to, refused my excuses when I said I couldn’t and for this, I am indebted to them.

“I put on my old boots and my competitive nature took over. I wanted to win, I wanted to prove that I was as good as I ever was, I had a new level of determination not to prove to those I was playing with but to prove to myself that losing an arm wouldn’t hold me back. Through this simple game, once per week for one hour I rediscovered the joy for the sport that I had forgotten whilst I was wallowing in self-pity after my accident.”

Justin is a keen member of the GAWA and would love nothing more than other amputee’s in Northern Ireland to get involved in bringing amputee football to Northern Ireland.

“The great thing about football, is its inclusiveness. There’s sectors of the sport for everybody. There’s a CP team, a Powerchair team, a Visually Impaired team, to name but a few, and, hopefully soon, a Northern Irish team at club level to participate in the National Amputee Football League.

"For anyone that may be interested in talking about or taking part in amputee football, the can contact me and I’d be more than happy to chat, train and introduce you to the sport. It has changed my life, and it could change yours.”

Disability Football Manager for the Irish FA, Alan Crooks, has urged amputees in Northern Ireland to get in touch: “With support from the Irish FA Justin will be working with Glentoran as they hope to start an amputee programme this season so please get in touch to help make this happen.”

Please contact Alan at alan.crooks@irishfa.com to find out more details about how you can get involved.

Justin and the rest of the Irish Amputee Football Team are trying to fund their trip to Mexico for the Amputee World Cup. If you would like to make a donation then CLICK HERE to read more on Justin’s story.

You can watch a full interview with Justin on his story and love for Northern Ireland by clicking on the video at the top of this page.