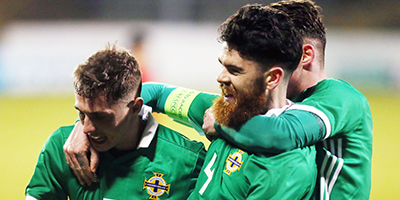 Northern Ireland U21s will play Slovakia U21s at the National Football Stadium at Windsor Park on Tuesday 16 October in the final match of a highly successful EURO 2019 qualifying campaign.

Ian Baraclough’s side are still in the hunt for qualification having won three and drawn two games so far. They will play away matches against group leaders Spain and in-form Iceland before coming back to Belfast for the Slovakia game.

They are the most successful U21 side in recent history and the match will enable fans to come to the National Football Stadium at Windsor Park to roar on the team, to celebrate their achievements and to watch the next generation of senior men’s internationals.

Speaking about the game Ian Baraclough said: “We still have important matches to play in this group, but it is great to know that our final qualifying fixture will be at the home of football in Northern Ireland.

“As a young player you dream of playing on the biggest stage and for many of these players this match will be the first time that they have run out at the National Football Stadium at Windsor Park wearing the green shirt of Northern Ireland.

“That will be a fantastic moment for them and will hopefully be a taste of what is ahead in their career. Our objective now is to perform in our upcoming away matches and to make sure that there is something to play for in front of a big home crowd.”

As well as the match there will be a full programme of activities for children, including face-painting, behind the scenes access and tours of the Education and Heritage Centre.

Ticket details for the game will be released next month but all current gold and silver campaign card holders, as well as official members will be able to access tickets to the game for free.

Liam Boyce 'buzzing' after he agrees move to Hearts