Baraclough’s boys are due to play the Hungarians at Ferney Park in Ballinamallard next Thursday (14 November) at 7pm.

And the following week - on Tuesday 19 November - they will be facing the rugged Romanians at Ballymena Showgrounds in a U21 Euros 2021 qualifier (5.30pm start).

The U21s have had a tough opening to their qualification campaign. In their four Euro qualifiers to date they have managed two draws and suffered defeats away to Denmark U21s and Romania U21s.

Crusaders forward Harry Robinson, who is on loan at Seaview from League Two side Oldham Athletic, is another newcomer. He previously played for the Northern Ireland U19s, as did Jack Scott.

Glentoran midfielder Chris Gallagher is back in the U21 fold after missing last month’s qualifiers away to Denmark and Romania, which both ended in defeat.

Also returning is Newcastle Jets defender Bobby Burns, who was excused international duty last month to enable him to settle in at his new club in Australia. He is on loan at the Jets from Hearts.

The match at Ballinamallard United’s Ferney Park ground next week will be an historic occasion as it will be the first time County Fermanagh has hosted a ‘senior level’ international match.

Hungary are hosting the Men’s U21 European Championship finals along with Slovenia in 2021 and the game against Northern Ireland is one of numerous warm-up matches for the Hungarians prior to the tournament. Their U21s are coached by former West Brom and Fulham star Zoltan Gera. 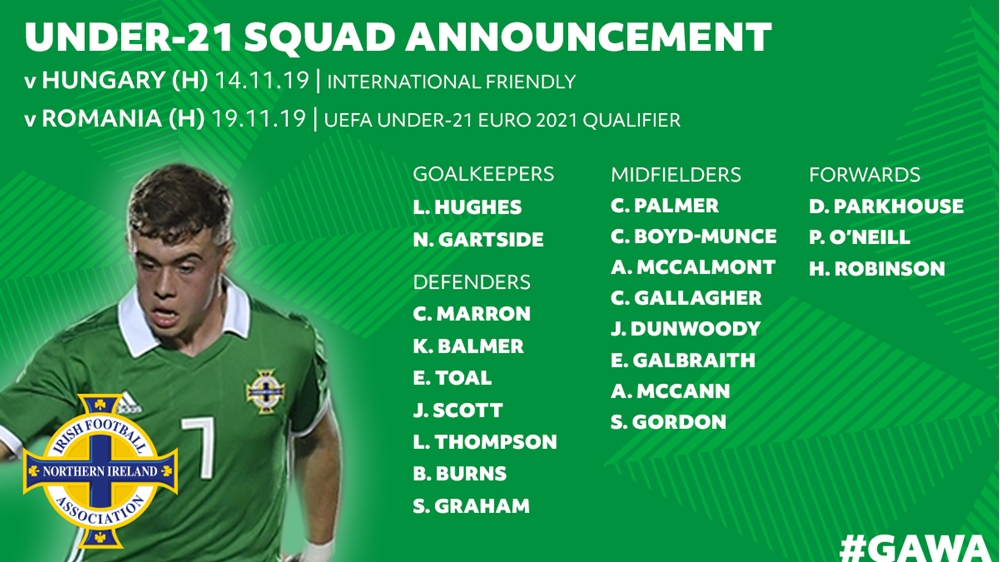