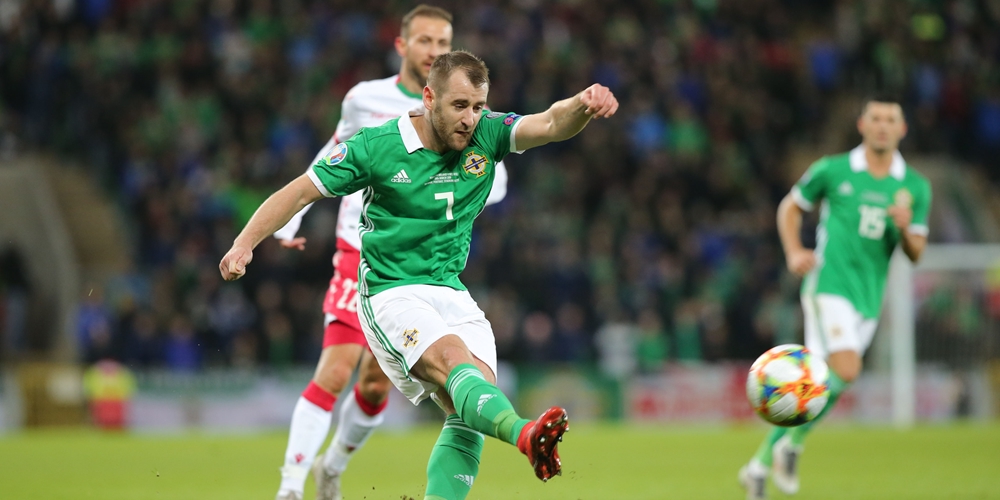 Winger Niall McGinn bagged his third goal of the season as Aberdeen made it three wins on the bounce following their 3-1 victory at Ross County at the weekend.

After going behind to an early penalty the 32-year-old equalised for the visitors on ten minutes after he fired home a free-kick for his second goal in his last five outings.

“It wasn’t the start that we wanted with them getting the penalty,” McGinn told the club website. “I am not even sure that it was penalty. We reacted in the right way though and thankfully my free-kick went in.”

Looking towards the double-header with the Netherlands and Germany McGinn added: “International games are always hard, and it is very competitive for places. I just have to keep myself right so when called upon I can do a job for the team.

“I am coming off the back of good performances and I am feeling confident after scoring a couple of goals so when I am called upon, I will be more than ready.”

Also in Scotland, under-21 midfielder Shea Gordon came off the substitute’s bench to score twice and give Partick Thistle their first home win of the season as they defeated Greenock Morton 2-1 at Firhill.  The former Motherwell player, who scored his first just 15 seconds after entering the fray, is hoping the much-needed victory will be just the push that bottom of the table Thistle need to kick-start their season.

“I feel like it’s a turning point in our season,” said Gordon, who has now bagged seven goals this term. “It can get our season going after a tough start.

“I think if we play as we did on Saturday then we can start moving up the table. It was more than three points for us.”

Other Northern Ireland players getting their name on the scoresheet were Caolan Lavery, who found the net for Walsall in their 2-2 FA Cup draw at home to Darlington and Cameron McGeehan who netted a consolation for Barnsley in their 4-2 home defeat to Michael O’Neill’s Stoke City.

Elsewhere over the weekend, Gavin Whyte played the final 15 minutes of Cardiff City’s single goal reverse to Bristol City yesterday after recovering from a hamstring complaint.

There was a man-of-the-match performance, and an assist, from 19 year-old left-back Danny Amos who made his first start of the campaign for Doncaster Rovers who drew 1-1 in the FA Cup at AFC Wimbledon.

Also in the first round of the competition former Bury central defender Adam Thompson made his debut for Rotherham United after coming on as a first half substitute in the 3-1 success at Maidenhead United.

Meanwhile, Michael Smith was back in the Hearts side after injury and chalked up two assists as the Edinburgh outfit recorded their first home win since March following their 5-2 defeat of St Mirren at Tynecastle.

Finally, former Linfield youngster Jack Chambers made his debut from the bench for Hednesford Town in their 5-1 FA Trophy win at Sutton Coldfield Town after joining the non-league side on a month’s loan from West Bromwich Albion.