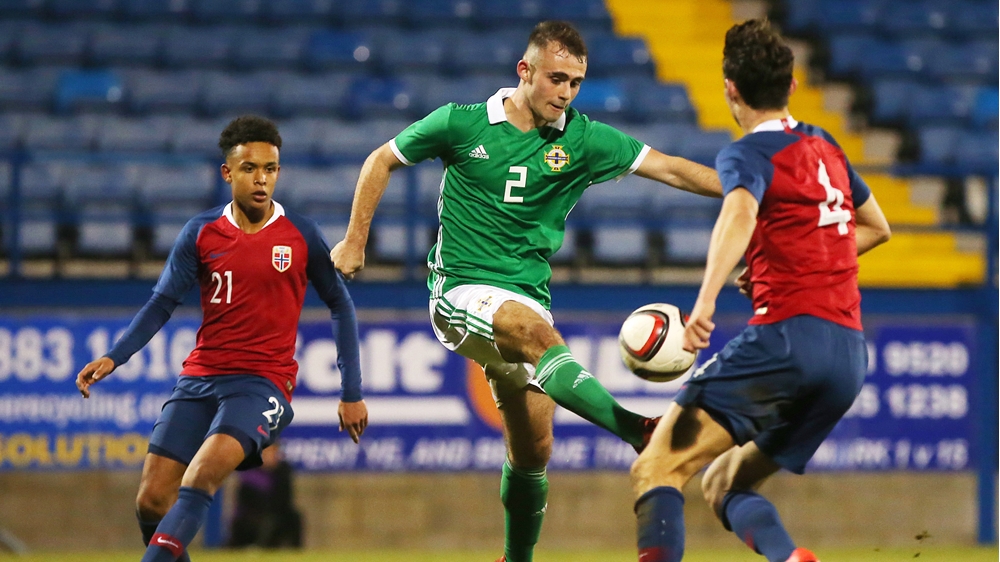 Norway got the better of Northern Ireland with a 3-0 win in the opening match of the UEFA Under-19s Championship preparation tournament.

Second-half goals from substitutes Emil Ceide and Noah Jean Holm either side of a beauty from skipper Thomas Rekdal handed the visitors victory at a bitterly cold Mourneview Park.

Stephen Frail’s boys were put through their paces in what was the first of three games in the space of eight days but showed real potential in various phases of the match.

The pick of the chances in the first 45 came in the early stages and with five minutes on the clock it was Norway’s Isak Dybvik Maatta who forced a fine save from NI ‘keeper Dermot Mee.

Minutes later Northern Ireland carved out a chance of their own courtesy of Lewis McCann whose rasping shot was parried by Rasmus Sandberg after some good work by John McGovern down the left flank.

Norway had a penalty shout waved away in the 37th minute when Maatta went to ground but Czech referee Pavel Orel wasn’t interested in his appeals.

Early in the second session Kornelius Hansen fancied his chances from distance but his shot from just outside the 18-yard box was ably dealt with by Mee.

Hansen was at it again on 55 minutes, drilling a right-footed shot on target only for Mee to produce a fantastic save low to his right.

Ten minutes later Lewis McCann picked out the unmarked Jake Corbett but the midfielder spurned what was a brilliant chance to break the deadlock but his tame strike was easily collected by Norway stopper Sanberg.

Norway eventually broke the deadlock when sub Ceide turned his man on the edge of the area and found the bottom corner in the 72nd minute.

Minutes later it was 2-0 when Norwegian captain Rekdal spotted Mee off his line and found the net from all of 40 yards out.

The visitors put the gloss on victory with 13 minutes remaining when sub Holm got beyond the Northern Ireland defence to slide the ball past the advancing Mee.