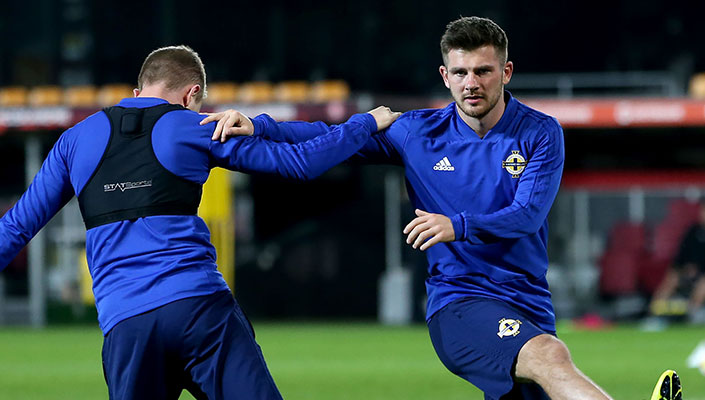 Winger Matthew Kennedy salvaged a point for nine-man St Johnstone when he fired home his fifth goal of the season as Tommy Wright’s side drew 1-1 at home to Aberdeen over the weekend.

The 25-year-old, who has been a regular fixture in the Northern Ireland squad this term, struck in the 71st minute to equalise for the home side who remain rooted to the bottom of the Scottish Premiership with just two league wins to their credit this season.

In the Premier League Jonny Evans, who missed last Tuesday’s encounter with Germany in Frankfurt, was substituted just after the hour mark of Leicester City’s 2-0 victory at Brighton & Hove Albion.

After the game Foxes boss Brendan Rodgers explained the reason for his substitution: “Jonny had to come off. He’s hardly trained all week and he was in hospital last weekend."

Also absent from Premier League duty was 21-year-old Jamal Lewis who missed Norwich City’s excellent away win at Everton after sustaining a knee injury in the scoreless draw with the Netherlands in Belfast.

In the Championship Gavin Whyte was ruled out of Cardiff City’s draw at Charlton Athletic while Middlesbrough’s George Saville and Hull City’s Josh Magennis were both suspended as their respective clubs played out a 2-2 draw at the Riverside Stadium on Saturday afternoon.

Meanwhile, Shane Ferguson, who lined out at left-back against the Germans last week, was another absentee as Millwall picked up all three points in an impressive 1-0 win at Swansea City.

“Fergie’s injury could be serious,” said new Millwall manager Gary Rowett. “He could have cartilage damage we’re not sure until we check it.”

In Scotland midfielder Liam Donnelly was also sidelined as Motherwell went down 3-1 to Hibernian at Easter Road.

“He had the flu,” revealed Motherwell supremo Stephen Robinson, “I think we missed a bit of his dig in the middle of the park.”

Former under-21 defender Pierce Bird made his debut for Boston United after joining the National League North outfit on a two-month loan last week.

However, his first appearance for the side ended prematurely as he had to be substituted just half-an-hour into United’s 1-0 defeat to Atherton Collieries in the FA Trophy after sustaining a facial injury.