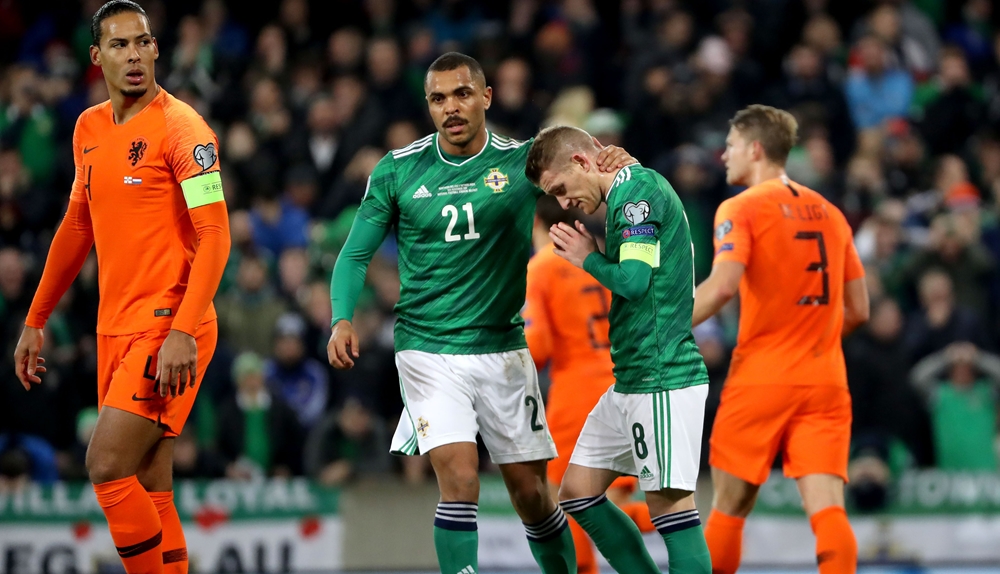 Northern Ireland wrapped up their home Euro 2020 qualifying campaign with a scoreless draw against the Netherlands.

It's a result that confirms the Dutchmen a place in the finals whilst also ensuring Northern Ireland will definitely have to follow the play-off route in order to join them.

With a number of scenarios still in play it remains unclear whether this was manager Michael O'Neill's last game in charge in Belfast but it was clear from the start that the crowd and players alike wanted to give him a send off to remember just in case.

Northern Ireland came storming out of the blocks, creating an opportunity as early as the fourth minute when Dutch keeper Jasper Cillessen hesitated over a clearance allowing Corry Evans to close in but the ball wouldn't land in time. Then, moments later, Jonny Evans headed just wide from a corner delivered to the far post.

The visiting defence barely had time to catch a breath as Northern Ireland continued to take the game to them with Paddy McNair's cross just glanced wide by Josh Magennis before a George Saville drive was then blocked by somewhat unintentionally by Mathjis De Ligt, who is on the ground in the box.

But the Dutch almost found the net themselves on ten minutes after Quincy Promes cut the ball back for Steven Berghuis to fire against the crossbar following a bit of a scramble.

Promes then curled an effort from just outside the box past the right post with Bailey Peacock-Farrell diving at full length while, midway through the first half, Donny van de Beek found Ryan Babel in space on the edge of the box but, thankfully, the move was flagged offside.

Then, after half-an-hour, Northern Ireland were presented with a gilt-edged opportunity to move in front when Dutch defender Joël Veltman was penalised for handball in the box after a McNair cross. However, after a short delay, skipper Davis failed to capitalize with a blazed spot-kick over the bar.

And it almost proved to be a costly miss when, a few minutes later, a sweeping Netherlands move saw Babel tee up Daley Blind but he could only sidefoot over from the edge of the area.

Ronald Koeman's side looked much more composed after the break, enjoying sustained periods of possession but only occasionally attempting to turn it into a threat in front of goal.

They did come close just before the hour when Babel rose to meet a Berghuis knockdown but Peacock-Farrell did well to save on the line.

Another chance followed about ten minutes after that. Frenkie de Jong played through a well delivered ball for Blind who, in turn, looked to find Promes only for McNair to make a timely block.

The group stage of the campaign concludes on Tuesday evening in Frankfurt against Germany who this evening hit four goals without reply past Belarus.