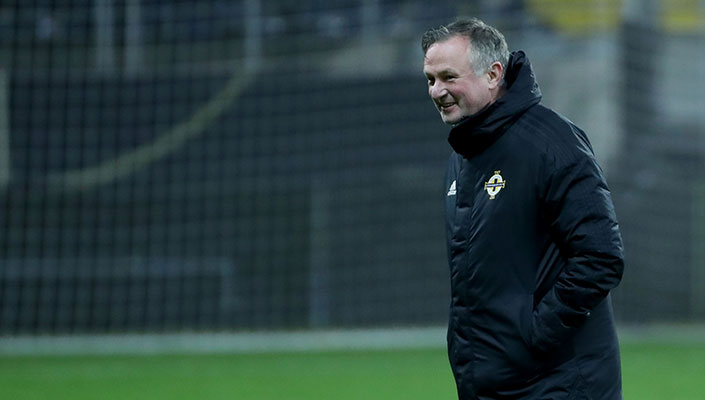 Michael O’Neill has revealed he will freshen things up against Germany in Frankfurt tonight.

The Northern Ireland manager is aiming to finish the group stage of Euro 2020 qualification on a high at the Commerzbank-Arena, home of Eintracht Frankfurt.

“We will play to win, I assure you. I will freshen the team up a little but I expect my starting eleven to give it their all, as they always do,” he said.

Northerrn Ireland may already have secured a Euro 2020 play-off spot in March 2020 but the manager is in no mood to rest on his laurels.

“Some people are saying this game is a dead rubber, however I don’t see it that way at all. It’s another opportunity for our players to secure a big scalp and there are also ranking points at stake,” he said.

Michael O’Neill revealed at a press conference at the stadium last night that a couple of players picked up knocks during Saturday’s 0-0 draw against Netherlands in Belfast.

He praised the team’s performance against the Dutch, especially their efforts in the first half, and urged them to show the same desire and passion once again.

Michael O’Neill joked at the press conference that he would like to see Toni Kroos rested by Low but it’s understood the classy Real Madrid playmaker will be in Die Mannschaft’s starting eleven.

The Northern Ireland boss pointed out that even if the Germans do make several changes in Frankfurt tonight (7.45 GMT start) the players coming in will want to impress their manager ahead of next summer’s Euro 2020 finals. "We'll certainly be facing a highly motivated team," he stressed.

Bayern Munich winger Serge Gnabry, who was a constant thorn in the Northern Ireland defence’s side when Germany defeated the boys in green and white 2-0 in Belfast back in September, is expected to be rested by the Germans, although he will be named among the substitutes.