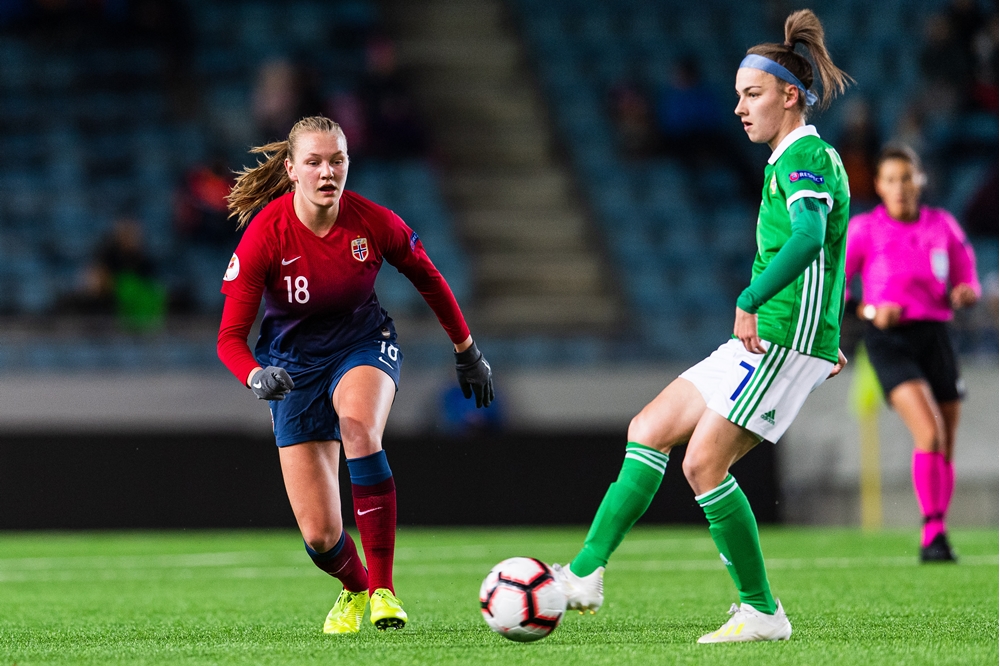 Northern Ireland’s Senior Women were outclassed by Norway in a UEFA Women’s Euro 2021 qualifier in Stavanger this evening.

The 6-0 defeat to the Norwegians was not unexpected, however, given that the hosts reached the quarter-finals of this year’s Women’s World Cup in France and are top seeds in Qualifying Group C for Women’s Euro 2021.

And the handsome victory meant Martin Sjogren’s team extended their lead at the top of the pile to 12 points from four games with 32 goals scored and only one conceded.

Norway also defeated Northern Ireland 6-0 in Belfast back in August in Kenny Shiels’ first competitive game in charge of the senior women’s team – and they showed their ruthless streak once again at the Viking Stadion. They created more than 30 chances in the match compared to three efforts carved out by the girls in green and white.

The hosts took the lead as early as the third minute, forward Lisa-Marie Utland sweeping the ball home.

Striker Caitlin McGuinness forced a save out of Norwegian keeper Cecilie Fiskerstrand and midfielder Chloe McCarron steered an effort wide before Utland was on the scoresheet again on 12 minutes. Ingrid Wold slipped the ball to her and she found the back of the net.

Northern Ireland keeper Becky Flaherty produced a string of good saves during the remainder of the first half to keep the scoreline at 2-0.

The first chance of the second period fell to Northern Ireland captain Sarah McFadden, however she missed the target.

Norway extended their lead on 51 minutes when Caroline Graham Hansen played in Guro Reiten and she made no mistake.

Two minutes later Reiten turned provider. Her delivery from a corner was met by Ingrid Syrstad Engen who finished powerfully past Flaherty.

Northern Ireland, who had to travel to Stavanger without injured Everton Ladies striker Simone Magill, continued to be under the cosh as the Norwegians swept forward at any given opportunity.

Flaherty produced another couple of saves before the home side made it five with 70 minutes on the clock. Wold found Graham Hansen and the Barcelona striker applied the finish.

Substitute Elise Thorsnes missed a good opportunity for Norway in the 77thminute before Flaherty blocked another shot.

Norway continued to pile on the pressure and in the second minute of added time, following a flurry of corners, they put the icing on the cake. Reiten was once again the provider, feeding Graham Hansen, who fired the ball into the net to make it 6-0.

It was a disappointing result for Kenny Shiels’ side, who will now turn their attention to a Euro qualifier against Wales at Seaview Stadium in Belfast on Tuesday (12 November). 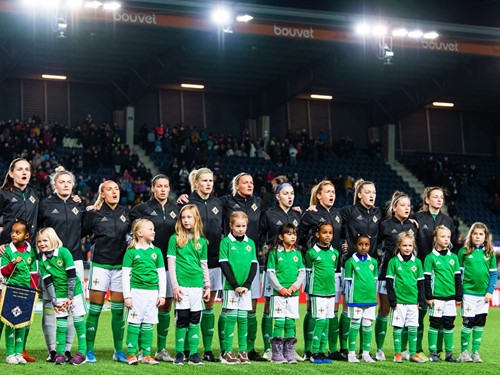 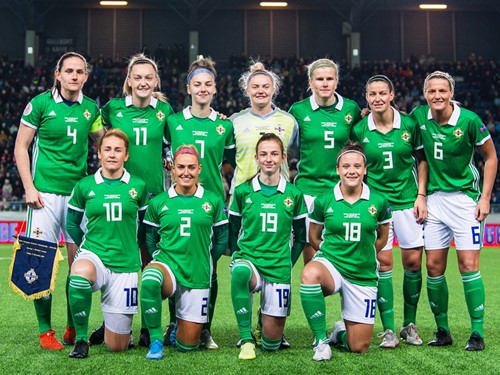 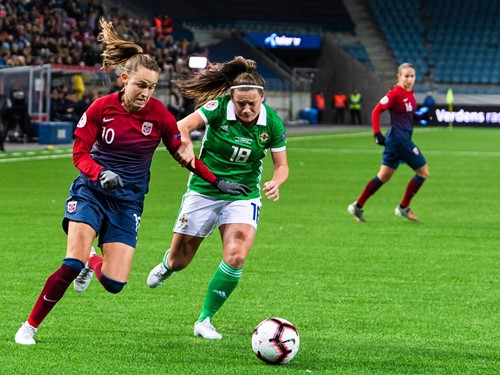 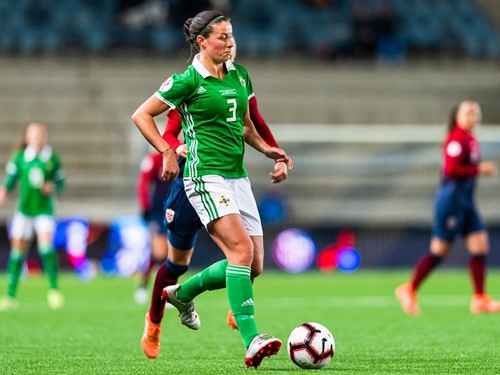 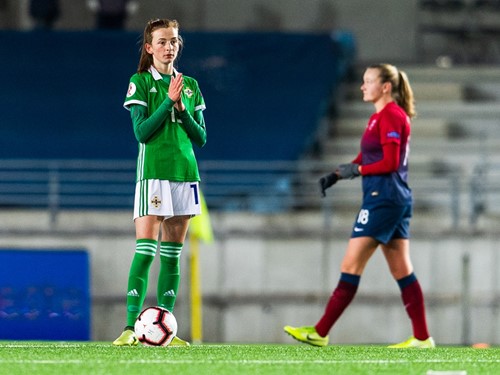 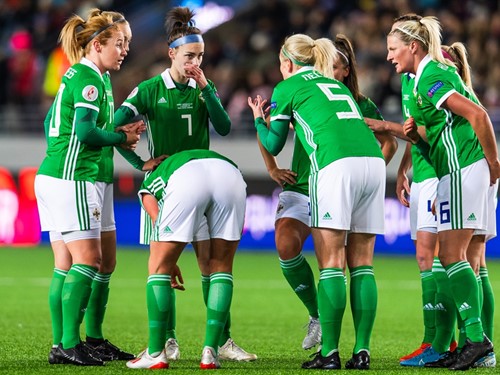 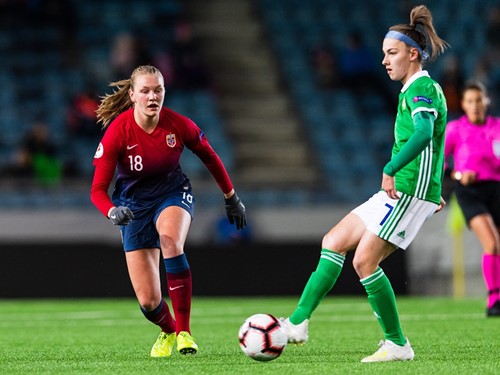 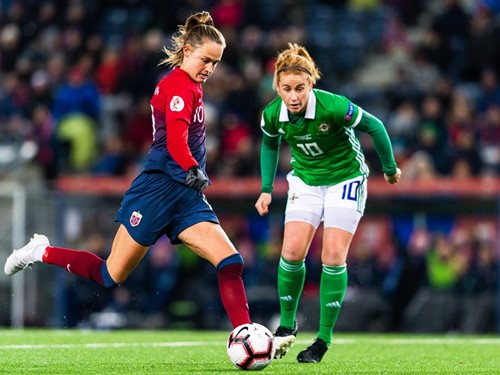 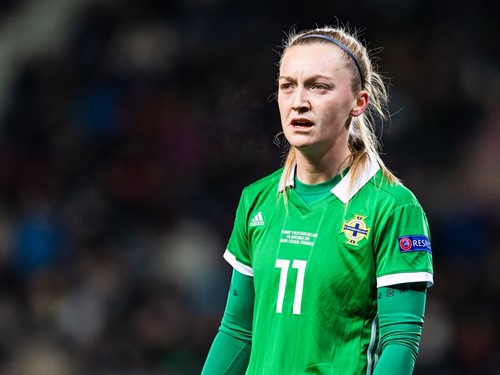