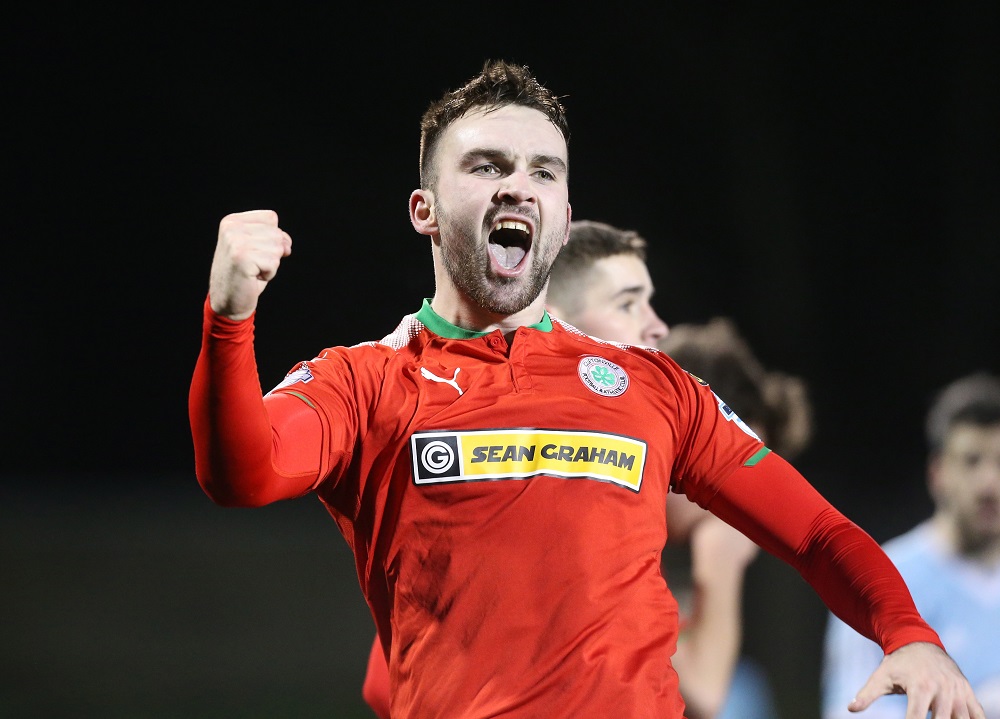 The Tennent's Irish Cup Fifth Round traditionally produces no shortage of drama and excitement on what is one of the most eagerly anticipated dates in the calendar.

And this season it once again didn't disappoint with the usual smattering of twists and turns as many of the 16 games on offer swung one way and then another.

Nowhere was this more evident than in the all-Premiership clash at Solitude during which Cliftonville defeated Warrenpoint Town by the odd goal in seven.

Tongues had already been set wagging when news emerged that 'Point manager Matt Tipton had come out of retirement to name himself amongst the substitutes and when Martin Murray fired the visitors in front after just six minutes with a clinical finish past Brian Neeson after racing onto a through ball it only served to crank the excitement up another notch.

This was how it stayed until either side of the break when the Reds hit back with goals from Jamie Harney and Ross Lavery.

Cliftonville were reduced to ten men just after the hour following Jaimie McGovern's dismissal but, despite this Reds boss, and former Warrenpoint supremo, Barry Gray could have been forgiven for thinking his side had done enough as time ticked down.

Tipton then threw himself into the fray in an attempt to force extra-time, and it worked when Murray popped up again with four minutes remaining to level the scores.

That was a dramatic enough conclusion to the 90 minutes as it was, but there was still time for Tipton to then get himself sent-off after collecting two booking in quick succession less than ten minutes after coming on.

Moving into extra-time Harney (pictured), a defender no less, made turned himself into a hat-trick hero with two extra-time goals to put Cliftonville into a commanding position and seemingly through to the next round.

But the thrills didn't end there. Warrenpoint pulled one back through Darius Roohi on 116 minutes to set up a nail biting grandstand finish.

The Reds did manage to cling on to secure their sixth round berth only to be paired with their great rivals Crusaders in the draw that followed soon after.

The Crues progressed via a two-goal defeat of Maiden City, competing in the competition for the first time after only being formed less than two years ago.

When Jordan Forsythe fired Crusaders in front after just 70 seconds it seemed a rout would be on the cards, but the visitors kept it to just a single goal until late in the game when David Cushley struck to make things more comfortable for Stephen Baxter's side.

There was extra-time drama at Shamrock Park, too, after Stewart Nixon's late winner ensured Ballyclare Comrades battled from behind to defeat Portadown. Adam McCallum had given the Ports the lead on 27 minutes with Nixon levelling just short of the hour before he doubled his tally on 119 minutes as penalties loomed large.

An extra 30 minutes was also required at the Belfast Loughshore Hotel Arena as Glenavon swept to a 3-1 defeat of Carrick Rangers.

Bobby Burns edged the Lurgan Blues in front in first half stoppage time, with Mark Surgenor levelling from the spot on 54 minutes. However, Gary Hamilton's side secured victory with goals from Jamie Singleton and Andrew Mitchell.

Losing finalists last season, Coleraine, were top scorers on the day with a 7-0 thumping of Lisburn Distillery at The Showgrounds.

Although there were no upsets many eyes were focused on Ferney Park as Ballinamallard United, struggling at the wrong end of the Premiership, hosted Amateur League opponents Immaculata.

The Mallards did progress in the end but they didn't have it all their own way. Sean Noble had handed them an early lead but Brian McCaul dragged 'Mac back into the game with an equaliser early in the second half.

But two Ryan Curran goals within a quarter-of-an-hour, either side of a Stephen Flynn strike, shot United into a strong position before their nerves were tested again when Kevin McGovern reduced their lead before the end.

On paper Glentoran squeezed past Lurgan Celtic 2-1 at Knockramer Park but two first half goals meant that Gary Haveron's charges were never really troubled with Celtic's consolation coming late in the game.

Also reaching the next round were Institute, Larne, Loughgall, Newry City and Dundela.