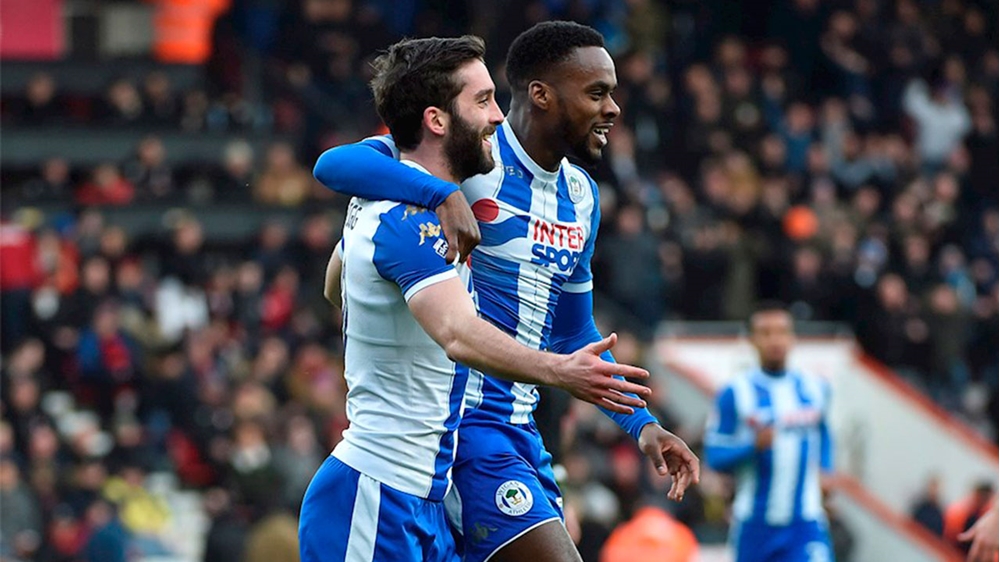 Striker Will Grigg scored the 100th goal of his club career when he opened the scoring for Wigan Athletic in their third round FA Cup tie against Premier League Bournemouth at the Vitality Stadium at the weekend.

Despite the 26-year-old stroking the ball home after just three minutes the Latics had to be content with a 2-2 draw after Eddie Howe’s side came back from two goals down to force a replay against the League One leaders.

"It was nice to fall for me there, 100 club goals is obviously a great achievement for me," declared Grigg, who is now just four short of 50 goals for Wigan.

After being 2-0 up at half-time the striker admitted there was disappointment that they did not kill the game off.

He said: "We’ve had a good start and were full of energy first half and got a really good 2-0 lead that we deserved.

"The second half was always going to be difficult and I think when they get the first it’s backs against the wall, but for half an hour towards the end of the game we created a lot of chances."

Elsewhere in the competition, the evergreen Gareth McAuley made his fifth start for West Brom this term as the Baggies progressed through to the next round with a 2-0 success at League Two Exeter City.

McAuley’s international colleague Chris Brunt was made skipper for the day and admitted that Saturday’s tie at St James’ Park was a tricky encounter.

Brunt said: "It was always going to be difficult conditions with the way their stadium is, the wind blowing and the pitch wasn’t great. But we adapted to it well in the first half and I thought we started really well and created a lot of chances to put them under pressure.

“All in all it was a game we needed to win,” added the 33-year-old. “Obviously we’re on a horrendous run in all competitions, so it was nice to break that duck and hopefully we can take a bit of confidence into the Brighton game next week.”

Sheffield United pair Danny Lafferty and Caolan Lavery both started in the Blades' 1-0 win at Ipswich Town with the latter providing the assist for the winner against his former club.

Meanwhile, the unfortunate Corry Evans was replaced two minutes before the break of Blackburn Rovers’ 1-0 reverse at Hull City after picking up a thigh injury, while Southampton skipper Steven Davis was pleased with the Saints' single goal victory at his former employers Fulham.

Davis said: “The fans were in good voice and came to Craven Cottage in good numbers today.

‘We were obviously gutted last season not to win the (EFL Cup) final, having put in a good performance against Manchester United, but if we can have a little cup run alongside picking up our league form it’d be a boost for everybody.’

Northern Ireland U21 international Paul Smyth made his second appearance for QPR. The Championship side went down 1-0 to League One MK Dons at Loftus Road.

Former Derry City player Rory Holden was named in the Bristol City matchday squad for the first time as the Championship side went out of the competition following a 3-0 defeat at Premier League Watford.

In League Two there is no stopping former Northern Ireland under-21 striker Billy Kee who chalked up his 15th goal of the campaign as Accrington Stanley cruised to a 4-0 win over Chesterfield.

Finally, left-sided midfielder Jordan Thompson made his debut for Livingston in the Scottish Championship after coming on as a second half substitute in the 1-0 home defeat to Queen of the South.

The 20-year-old joined Livingston on loan from Rangers last week until the end of the season.