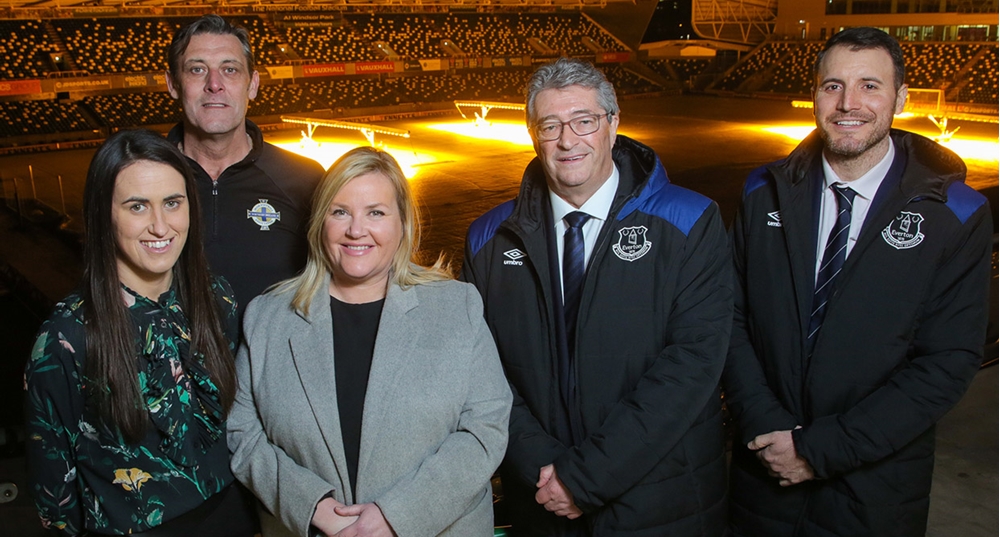 Key figures from one of the English Premier League’s leading community schemes have been providing Northern Ireland sporting organisations and statutory bodies, including the Irish FA, with plenty of “food for thought”.

Over the past two days representatives from Everton FC’s charity arm have been visiting the National Football Stadium at Windsor Park to highlight the organisation’s work and to help promote the recently launched Stadium Community Benefits Initiative, a 10-year partnership programme to be delivered by the Irish FA, Belfast City Council and the Department for Communities.

Earlier today a networking session was staged at the stadium. Speakers included Michael Salla, director of health and sport at Everton in the Community, who focused on mental health issues, while Sue Gregory, the charity’s director of youth engagement, employability and sports development, talked about youth engagement on Merseyside.

And the executive director of Everton ITC, Philip Duffy, gave an insight into the charity’s involvement with sport in the community.

The networking session - it attracted key stakeholder groups representing the sport, health, leisure and community sectors - was part of a two-day Sport In The Community conference which began last night with the three representatives from Everton ITC again among the speakers.

Also on day one of the conference the work of the Female Sports Forum was outlined in a presentation by Danielle McDowell, while the Volunteer Now organisation provided advice on how to recruit, retain and reward volunteers.

He said: “You can’t help but be inspired by Everton in the Community and the work that they do. Their representatives certainly provided us with plenty of food for thought as we establish the Stadium Community Benefits Initiative.”

The Irish FA/BCC/DfC initiative will see the National Football Stadium act as a catalyst for a wide range of programmes and projects aimed at promoting community engagement through schools, clubs and youth organisations.

It will also support new and existing football clubs to increase their capacity to develop and grow as well as generally promoting wellbeing and healthy lifestyle choices among the wider population.

Image: At the conference were (from left) Lynne Wilson of Belfast City Council, Malcolm Roberts (Irish FA) and Sue Gregory, Philip Duffy and Michael Salla from Everton in the Community.

To hear from all of the visitors from Everton in the Community you can click on the video at the top of the page.