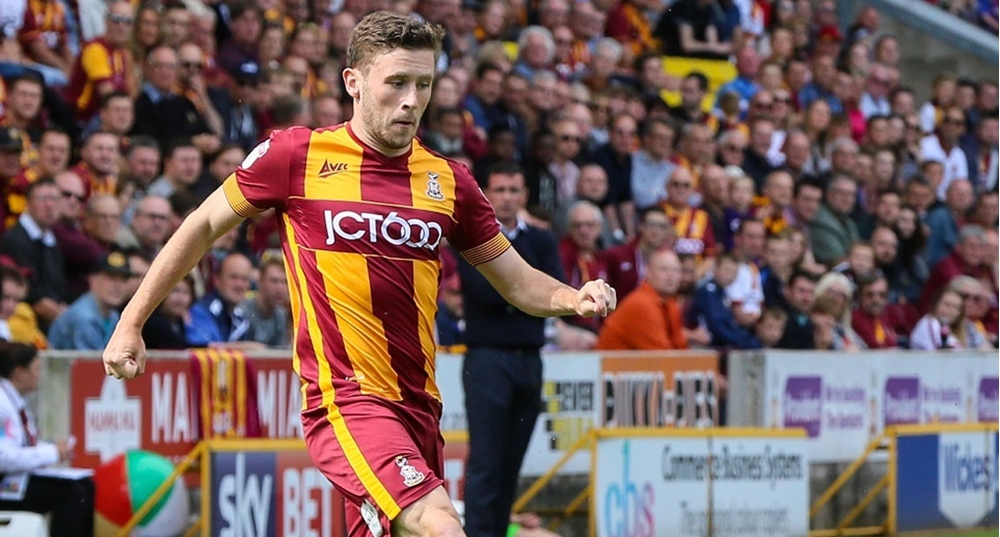 Shay McCartan scored his first goal for Bradford City in four months as the League One side recorded a 3-2 home victory over Oxford United at the weekend.

The former Accrington Stanley forward's only previous goal for the Bantams was in a 3-3 draw at Walsall on 26 August - and he was starting a league game for the Yorkshire outfit for the first time since that trip to the Banks Stadium.

The 23-year-old was snapped up in the summer by City boss Stuart McCall for a fee of £200,000, however a number of niggling injuries have prevented the Newry-born striker from pushing for a regular place in the team.

Not surprisingly, McCartan’s former club colleague at Accrington Stanley, Billy Kee, was on the scoresheet again as the League Two side returned to winning ways with a resounding three-goal victory at Grimsby Town.

The former Leicester City trainee gave the visitors the lead 10 minutes after the break when he converted his third penalty in successive games to take his tally for the campaign to a very impressive 14.

In Scotland Hearts set a new club record of six consecutive games without conceding a goal following their 0-0 draw at Aberdeen on Saturday. Unfortunately the achievement was slightly marred after striker Kyle Lafferty was given a straight red for a challenge on Graeme Shinnie.

Hearts boss Craig Levein felt the sending off was harsh though.

"Kyle was chasing back, and he was a fraction away from the ball. I feel sorry for him,” admitted Levein, “The referee said he went in with excessive force but it wasn’t any more forceful than other tackles in the game.”

Hearts now begin a three-week winter break, with Lafferty due to miss the Scottish Cup fourth round derby tie with Hibernian on 21 January.

“It’s a particularly sour note for him,” Levein added. “We’ve finished and we’re off for a break but he’s got that in his memory. He knows he’ll miss the cup tie as well.”

The Edinburgh side are though set to launch an appeal against Lafferty’s red card after viewing footage of the incident.

Meanwhile, there was good news for both Burton Albion and Northern Ireland when Brewers manager Nigel Clough indicated that former Cliftonville striker Liam Boyce, who suffered a cruciate ligament injury in August, could return to action before the end of the season

Clough said: “Liam Boyce is coming on fantastically well in his rehabilitation. We hope to have him back for the last quarter of the season, something like that, which will be a big boost.

“We are hoping, if everything goes well and it gets the OK from all the medical people, that he should be training in mid-February with a view to just getting a little outing here and there, and then at the start of March he should be ready to go.”

Finally, in League Two former Ards left-back Josh Doherty made his first league start for Crawley Town since September in the single goal win over Stevenage who themselves had Ben Kennedy back in their starting line-up for the first time since late October.