U18 Schoolboys produce five-star performance to win trophy in Jersey 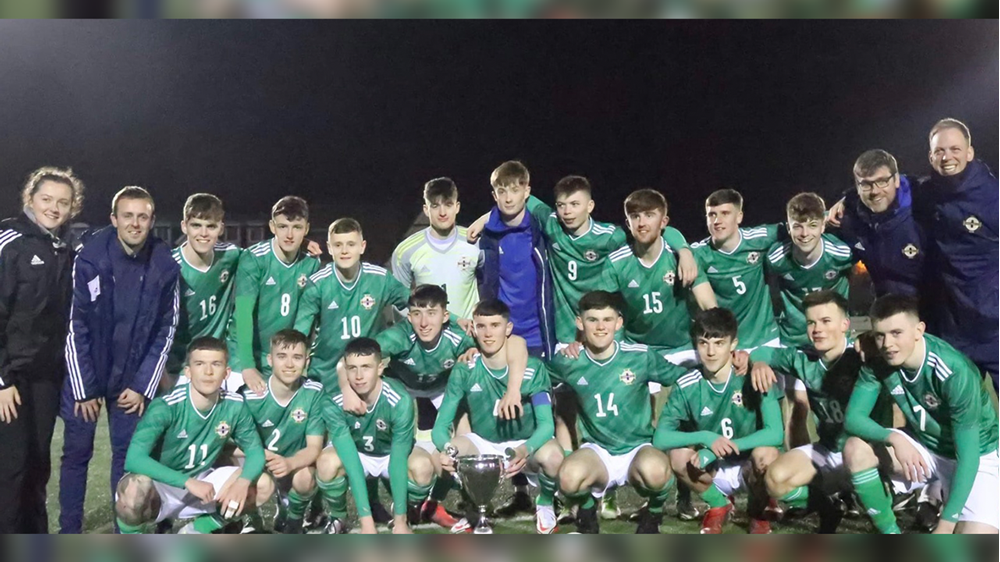 Northern Ireland’s Under-18 Schoolboys completed their short tour to Jersey with an emphatic victory – and they won a trophy.

After drawing 2-2 with Jersey’s U18s in the first of their two games in the Channel Islands, Frankie Wilson’s team were expecting a tough challenge against a Jersey U21 side.

However, Northern Ireland fired on all cylinders at the Springfield Stadium in St Helier as they retained the Lynne Nicholson Trophy thanks to a 5-1 win.

Only four of the players who started against Jersey’s U18s – Lewis Tosh, Donal Scullion, Patrick Kelly and Max Greer – retained their places in the starting line-up.

Greer quickly repaid the faith shown in him by the manager when he provided the assist for the opening goal. It came after 10 minutes when he fed the ball to Liam McStravick and he slammed the ball into the net. It was a fine finish.

Soon afterwards McStravick, who came on as a substitute in the first match, missed a great opportunity when put through by team captain Kelly. He was one on one with the Jersey keeper but lifted his shot over the bar.

Jersey's best chance came on the half-hour mark when good work by Darryl Mvalo created an opening for Harry Scott but U18s keeper Rian Brown moved swiftly to block his low drive and the danger was cleared.

Tosh doubled the lead in sensational fashion after 38 minutes. Picking the ball up on the halfway line the talented midfielder ghosted past two opponents before cutting in from the left and unleashing a right foot shot from 20 yards which flew into the top corner.

Four minutes after the restart Northern Ireland went further ahead with another stunning goal. McStravick and Kelly combined well down the left and when the ball was played to Patrick McLaughlin his right foot shot from the edge of the box was perfectly placed to give Jersey keeper Robbie Scott no chance.

McStravick and Kelly were a constant threat and on 71 minutes the duo carved open the home defence once again as McStravick's delicate lob gave Kelly the chance to finish with a low drive into the corner.

With 10 minutes remaining substitute Jack Montgomery added the fifth goal, running on to a pass from fellow sub Luca McGreevey to net with aplomb.

In the final minute Rai Dos Santos was brought down inside the box and the striker made no mistake with the spot kick, sending Brown the wrong way to grab a consolation goal for Jersey.

The five-star performance will undoubtedly help to boost preparations for this year’s Centenary Shield competition for the Schoolboys team, which is run by the Northern Ireland Schools’ FA with support from the Irish Football Association.

The 2019 shield winners and current holders - the 2020 edition was not completed due to Covid and last year’s competition was scrapped because of the pandemic – are due to begin their 2022 shield campaign away to Scotland on 3 March, and the game will be streamed live across BBC iPlayer, the BBC Sport app and connected Red Button.