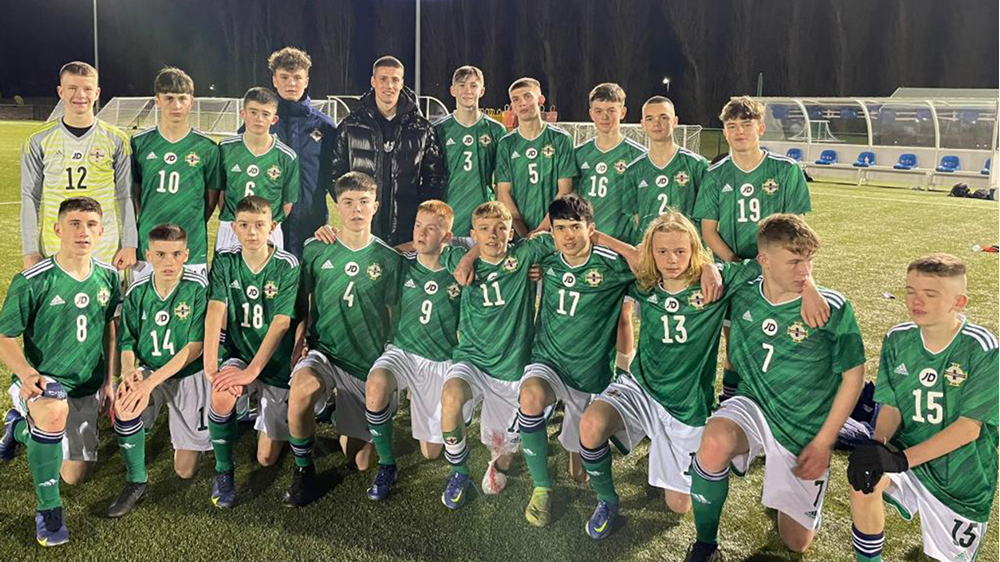 Northern Ireland’s Under-15 national team produced a sparkling performance against Chelsea’s U15s in the first of two challenge matches in England this week.

Andy Waterworth’s side played some scintillating football as they registered a 4-0 victory against their illustrious hosts at the Premier League club’s training ground near Cobham in Surrey.

Northern Ireland were aggressive out of possession during the 80-plus minutes and pressed high up the pitch, and it was a tactic that brought rewards.

We were so impressive and I was so happy how we played as a team. Four goals and a clean sheet against a top team is fantastic

The first goal in the friendly came after 12 minutes when Cole Brannigan won the ball back and fed striker Braiden Graham. His snapshot was pushed away by the Chelsea keeper, however Brannigan latched on to the rebound and, showing great composure, took the ball past the keeper and slotted it home.

Northern Ireland doubled their lead midway through the half and Graham was involved once again. He tested the keeper and the loose ball fell to the onrushing Callum Burnside whose effort looped over the home defence and nestled in the back of the net.

Waterworth’s side created several chances in the opening 40 minutes and could have scored more.

Down the other end goalkeeper Will Murdock and his solid defence were quick to snuff out any Chelsea raids.

It was 3-0 after 50 minutes. Jack Doherty retrieved the ball in the middle of the park and passed it to Brannigan who immediately laid it off to Sean Corry and he neatly slotted the ball between the sticks.

On 65 minutes Callum Cowan scored a peach to make it 4-0. The left back ran from deep before hammering the ball into the top corner from a tight angle. It was a lovely finish.

In the closing stages the U15s almost made it five. Brannigan let fly but his effort cannoned off the bar.

Afterwards Waterworth said it had been a courageous performance from his team and stressed that every single player contributed to an excellent result. He also noted that Chelsea were limited to just a few chances.

He also said: “I was really proud to see a Northern Ireland team with so much quality and enthusiasm. We were so impressive and I was so happy how we played as a team. Four goals and a clean sheet against a top team is fantastic.”

Goalkeeper Josh Gracey was the only player in the U15s squad who did not get a run-out against Chelsea, however he will be in the starting line-up for their second game of the short tour to England. That match is against a Southampton U15/U16 team tomorrow (5 February) and it is being played at the Premier League club’s Staplewood training ground (11am start).