U18 Schoolboys draw with Jersey U18s in opening tour game 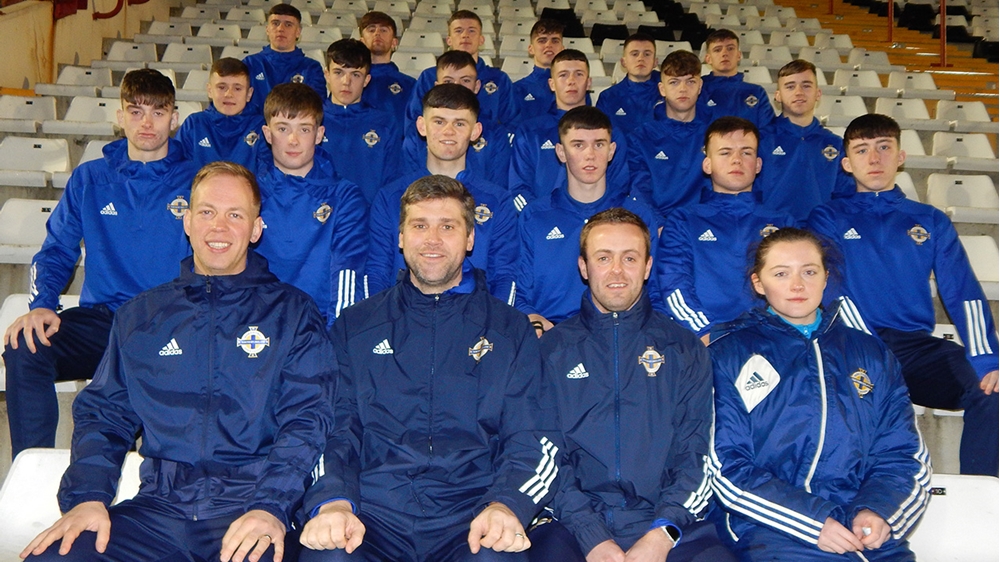 Northern Ireland’s Under-18 Schoolboys drew 2-2 with Jersey’s U18s in the first of their two games on a short tour to the largest of the Channel Islands.

Frankie Wilson’s team dominated for long spells during the friendly at the Springfield Stadium in St Helier, however they found it hard to break down a resolute home defence.

The visitors almost made a sensational start. With only 30 seconds on the clock Luca McGreevey robbed the ball off centre back Sammy Sutcliffe, but with only the goalkeeper to beat he dragged his shot wide of the upright.

Instead it was the home side who went ahead in the 10th minute when Patrick O'Toole pounced to net from close range when Northern Ireland failed to clear an inswinging corner.

Ten minutes later James Sunley doubled the lead with a spectacular effort from 25 yards, the ball going in off the underside of the bar, giving U18 Schoolboys keeper Alex Henderson no chance.

On the half-hour mark Northern Ireland reduced the deficit when Max Greer's right wing cross was met by Jack Montgomery and he volleyed the ball into the net from 10 yards.

Northern Ireland continued to press and a great move involving Montgomery and Jack McFeely created an opening for Patrick Kelly, however Jersey keeper Pierce Roche was quickly off his line to block the striker's effort.

After the interval Northern Ireland dominated but found a stout home defence difficult to break down.

With seven minutes remaining substitute Liam McStravick grabbed a well deserved equaliser. Fellow sub Ryan McKay made a great run down the left before squaring the ball to McStravick and he calmly finished from close range.

The U18 Schoolboys’ second and final game of the tour is against Jersey’s U21s this evening at the Springfield Stadium (7.00 start). And they will be competing for silverware - the Lynne Nicholson Trophy.

The tour is part of the preparations for this year’s Centenary Shield competition for the Schoolboys team, which is run by the Northern Ireland Schools’ FA with support from the Irish Football Association.

The 2019 shield winners and current holders - the 2020 edition was not completed due to Covid and last year’s competition was scrapped because of the pandemic – are due to begin their 2022 shield campaign away to Scotland on 3 March.

The game against Scotland at Renfrew FC’s ground in Renfrewshire is being shown live across BBC iPlayer, the BBC Sport app and connected Red Button.