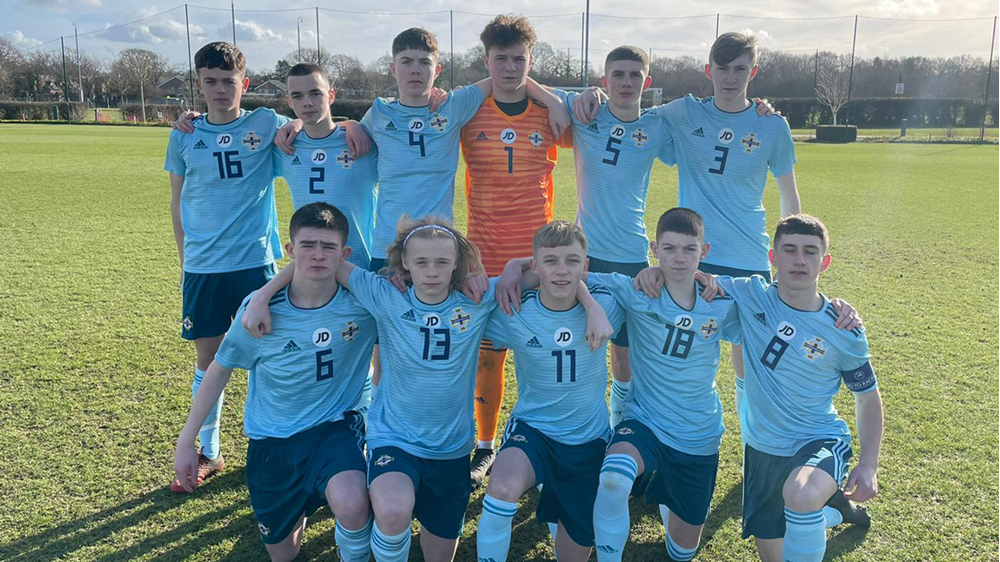 Northern Ireland’s Under-15 national team spurned several chances as they lost the second of two challenge matches in England.

After defeating Chelsea’s U15s 4-0 in their opening fixture, Andy Waterworth’s side were full of confidence ahead of the weekend game against a Southampton U15/U16 team.

However, despite creating numerous chances, they lost out to the Premier League club academy team by three goals to one.

We were delighted with the players and they can be very proud of their performances. Hopefully they see that if they want a career in football there is a lot of hard work required to do so

But the young Saints took an early lead and it was down to dithering in the Northern Ireland defence. In attempting to play out from the back the visitors played a loose ball and a Saints striker pounced and clipped it home.

The game was played in quarters and Waterworth’s side fell further behind at the start of the third quarter.

Although the U15s did not move the ball as well as they did against Chelsea, they continued to push forward and create chances.

They pulled a goal back with 10 minutes remaining when Ceadach O’Neill, who showed some lovely touches after being introduced from the bench, and fellow substitute Braiden Graham teed up Ryan Corrigan to slot the ball into the net.

The U15s missed a couple of opportunities to draw level. Calum Moreland lacked power in a header when well placed and substitute Callum Burnside smashed a free-kick against an upright.

In added time they were hit with a sucker punch when a Southampton cross into the area was adjudged to have crossed the goal line, and that left the final score at 3-1.

Afterwards Waterworth said the players could be proud of their performances in both matches.

He pointed out: “The benefit of playing in these games is that it lets the players see the importance of preparing as a footballer against the best in their age group.

“As coaches we get to see how players manage time spent at a performance camp, including diet, managing downtime and obviously performance.

“We were delighted with the players and they can be very proud of their performances. Hopefully they see that if they want a career in football there is a lot of hard work required to do so.”