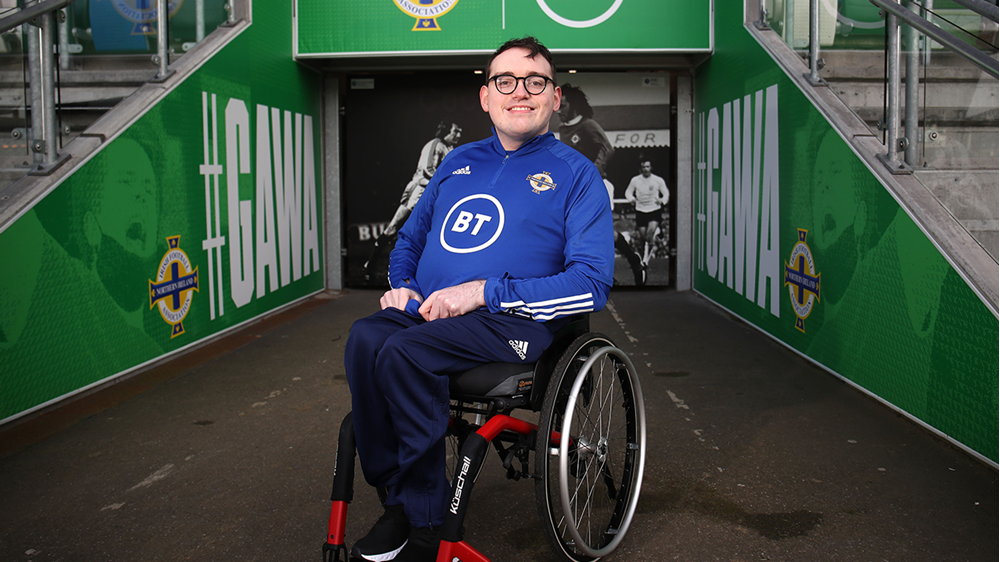 How long have you worked for the Irish FA/Irish FA Foundation?

My role as Irish FA Disability Access Officer typically involves working in several areas and with a number of departments.

I want to help create a world where everyone can enjoy watching the beautiful game without any barriers, no matter what their disability or personal challenges may be

The main areas that I would be involved with are the ticketing department, stadium and matchday teams and liaising with disabled fans, supporters’ groups, clubs and disability organisations.

Having this role in place will also help to ensure that disability access is at the forefront of football spectating in Northern Ireland, at national and club level.

As a result an important aspect of my role is to encourage and support best practice accessibility improvements across Northern Irish football - with the ultimate goal of making spectating safe, secure, supportive and easily accessible for all fans.

I want to help create a world where everyone can enjoy watching the beautiful game without any barriers, no matter what their disability or personal challenges may be.

In addition to this I am working to improve accessibility through improvements or changes to facilities, increasing disability awareness and facilitating bespoke training opportunities on various accessibility topics.

Examples of these would be disability and accessibility training for staff and stewards or DAO training for clubs. My role isn’t just limited to the Irish FA. I’m also involved in assisting and supporting NIFL clubs with any of their accessibility needs.

It can vary quite a bit. Sometimes it will be general administrative work, which is usually done from home at the moment. On other occasions I could be meeting with various departments and stakeholders as part of our accessibility plans and projects.

I also assist the ticketing department in the run-up to Northern Ireland fixtures. During the matches themselves I’m usually at the stadium to support disabled fans with any accessibility concerns or feedback that they may have. 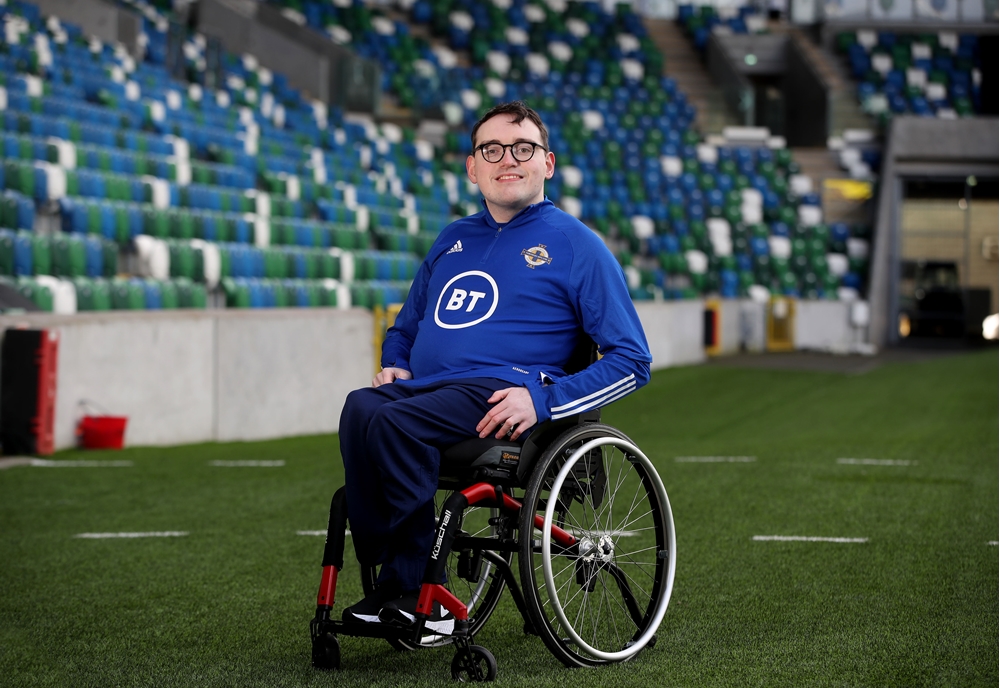 Being in a position to make a positive difference for disabled football fans across Northern Ireland.

I’m a wheelchair user who regularly attends Northern Ireland and Irish League fixtures (both men’s and women’s games), so it’s my hope that these experiences in conjunction with my personal challenges give me the best chance to improve the spectating experience in Northern Ireland for disabled people.

Probably trying to fit everything in because the role is so varied. As with any awareness role the challenge is to constantly educate both myself and others to help make the world a better, more accessible place.

Many people are still unaware of the challenges that disabled people face and the support that they need to have equal opportunities to non-disabled people. There is still plenty of educating and awareness raising to do.

There are many things within my professional, personal and sporting life that I’m proud of.

However, the fact that I work in football and have played football at the highest level for Northern Ireland are easily the achievements I’m most proud of. That was unthinkable growing up.

My job as Irish FA DAO is my first employed role since graduating from university.

I achieved first class honours in a degree in Sports Coaching and Performance from Ulster University School of Sport. I also attended college, studying sports, prior to this with an emphasis on coaching, administration and management.

I was a member of the Northern Ireland squad for the EPFA Nations Cup (Powerchair European Championships) in 2019. I’ve been actively involved in the sport here since a relatively young age. I also play for and coach Lisburn-based Lightning PFC.

Not actively, however I did participate in many different sports as a child.

It really started by going to watch local football with my dad. He took me to watch Glentoran as well as Northern Ireland games as a kid, and that’s something I still do with him today.

This not only ignited my passion for football in general but particularly local football. I firmly believe that local football is fantastic and underappreciated. Therefore it’s vital to incrementally improve the spectating experience so that more and more people can enjoy the sport that had such an influence on me

Coaching qualifications for many sports, including football. A first class honours degree in Sports Coaching and Performance. Training in accessibility, with an emphasis on the role and impact of positive disability access. College qualifications in sports, administration and management. Significant life experience as a disabled person and wheelchair user.

There weren’t too many disabled people within football to look up to when I was growing up, so it’s been a goal of mine to blaze a trail for disabled people and show that working in sport is a viable and achievable career path.

Outside of that I had the privilege of being coached by (former Northern Ireland international) Mal Donaghy as a kid. I learned a lot from him, and looking at the career he had was definitely an inspiration for me. I’d say I also look up to Michael O’Neill, Jonny Evans, Steven Davis and Sir Alex Ferguson among many others.

I love sport. I support Glentoran and have followed them home and away for many years (when my packed schedule allows, of course). I’m also a fan of motorsport, tennis and basketball.

There’s always sport to enjoy no matter the time or place. In addition I’m a keen gamer, regularly playing various video games in my spare time.

If you have any accessibility needs or queries, please contact Jason via email at dao@irishfa.com