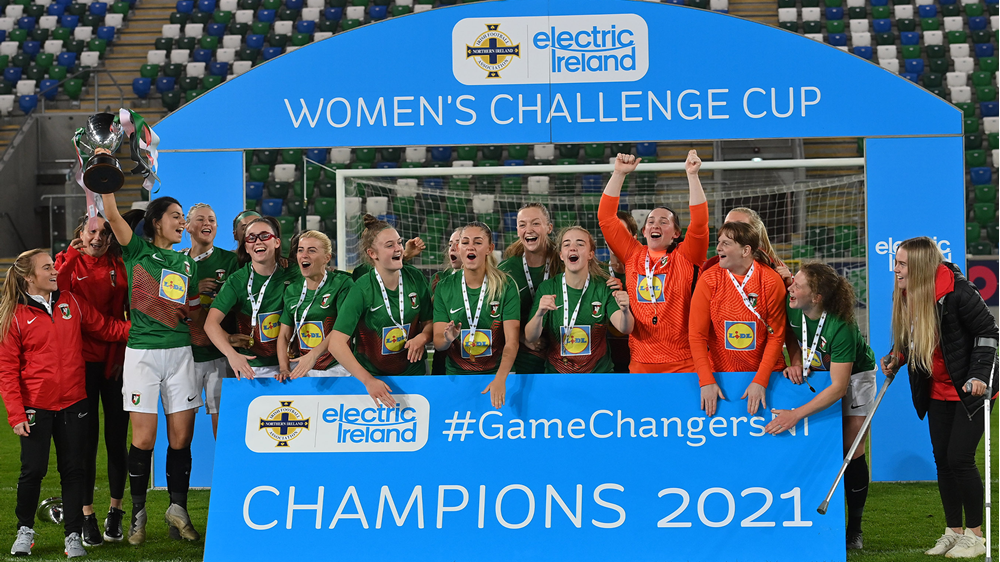 The Glens have won the past three Women’s Irish Cup finals – Covid meant the 2020 decider was not played – and they will no doubt be going all out for four in a row in 2022.

Glentoran completed a treble when they lifted the trophy at the National Football Stadium at Windsor Park back in October.

They had already secured the NIFL Danske Bank Women’s Premiership crown and the Toalsbet.com County Antrim FA Women’s Challenge Cup by the time they defeated Crusaders Strikers 2-0 in the Women’s Irish Cup decider thanks to goals from Joely Andrews and Lauren Wade.

The Glentoran squad is packed full of Northern Ireland international players, many of whom will be bound for the UEFA Women’s Euros in England this summer, and the Glens are expected to be the major force domestically once again this year.

The Electric Ireland-sponsored Challenge Cup produced some excellent games in 2021 and the organisers are hoping for similar exciting encounters this time around.

Entries for the 2022 Irish FA Women’s Challenge Cup are now live on the Comet system - and the closing date is Thursday 31 March. The entry fee is £20.

The competition will kick off this year with a preliminary round on Friday 3 June followed by round one on Friday 17 June. Seeded teams will enter the fray (second round) on Friday 5 August – and the quarter-finals are scheduled to be staged on Friday 16 September.

Friday 30 September is the date pencilled in for the semi-finals, while the final is due to be held at the National Football Stadium at Windsor Park on Saturday 5 November.