A club founder from Co Armagh and a club from Co Antrim have received special certificates from UEFA during presentations delayed due to the Covid pandemic.

Brian Sloan of Brookvale FC and Greenisland FC were both named as winners in UEFA’s annual Grassroots Awards back in November.

However, they have only just received their award certificates via the Irish FA Foundation after the spread of Covid-19 disrupted presentations throughout Europe.

More than 50 countries nominated their best volunteers and community clubs for the UEFA Grassroots Awards 2020.

Brian Sloan (72) was recognised by UEFA’s Executive Committee for his remarkable work with Brookvale.

Brian continues to be heavily involved. His sons also followed in his footsteps and now coach Brookvale teams, while his grandchildren play for the club.

He was presented with his award at Newry’s Jennings Park, named after legendary Northern Ireland goalkeeper Pat Jennings, who is heavily involved in promoting grassroots football through his work as a football ambassador with McDonald’s. 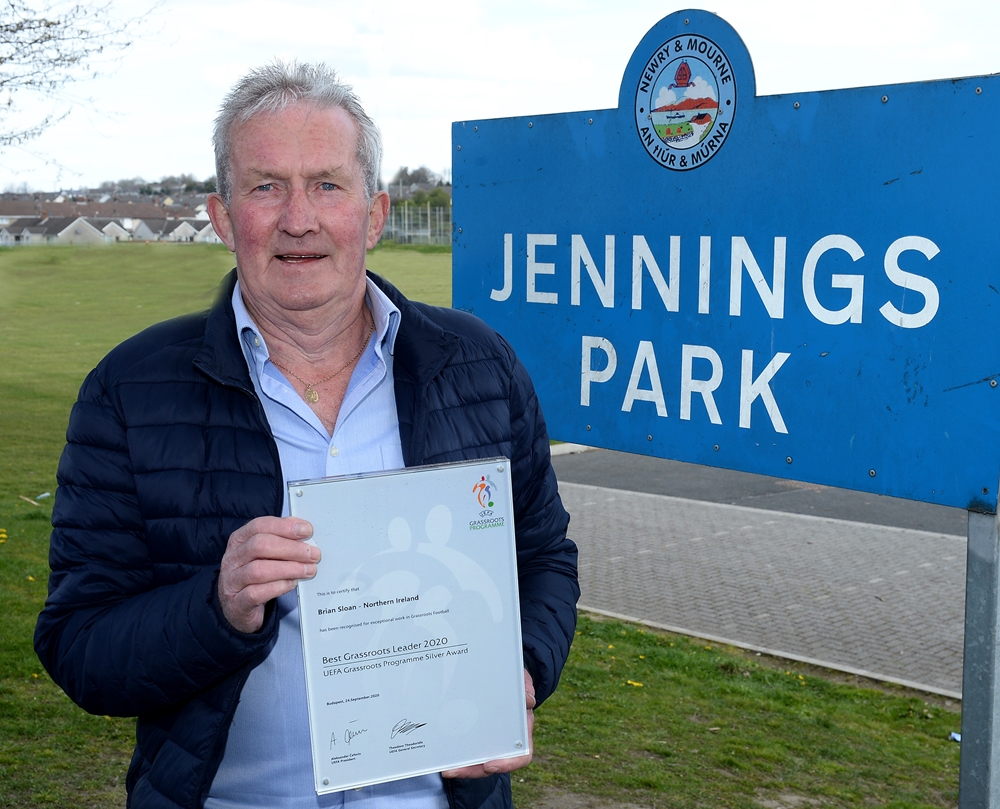 Greenisland Football Club’s members mainly come from the town itself and the Carrickfergus and Newtownabbey areas. Their clubhouse and 3G pitch, which was opened in 2019 with support from Mid and East Antrim Borough Council and Sport NI, act as a community hub.

The club’s alumni include current Northern Ireland internationals Jonny and Corry Evans, Craig Cathcart and Michael Smith and BT, which sponsors the Northern Ireland senior men’s team, featured the former players and the club in a promo video last year.

Greenisland offer senior and junior football and have around 400 players and 100 volunteers, providing playing opportunities for male, female and disability groups. They run programmes for children from the age of five upwards.

Their youth teams take part in various leagues, while their seniors play in the Northern Amateur League, and in 2019 they launched Greenisland Bears FC for boys and girls aged 7 to 12 with a learning and/or physical disability.

Both Brookvale and Greenisland also received 100 footballs apiece from UEFA as part of the awards – to support their grassroots activities.