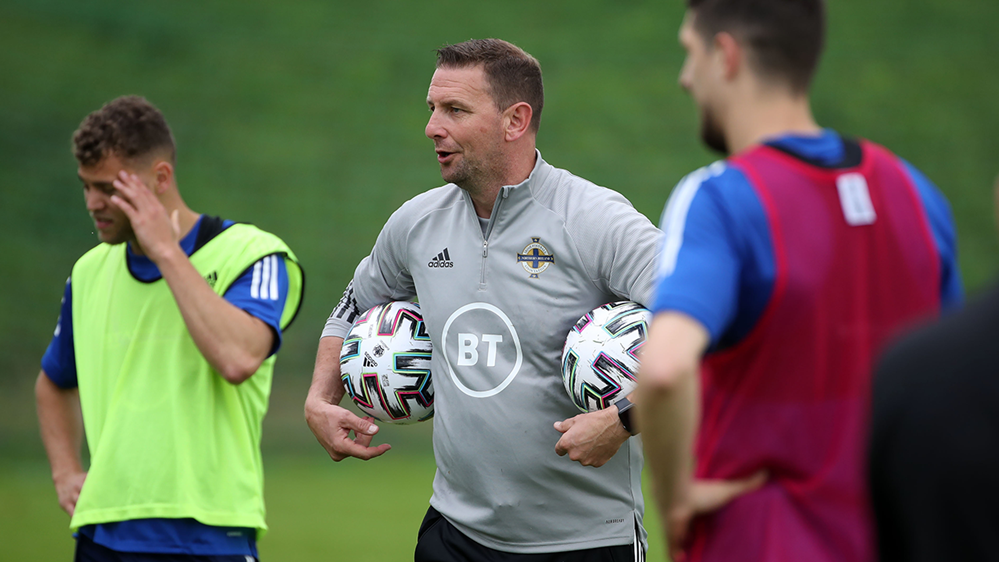 Northern Ireland manager Ian Baraclough has promised his team will be playing to win when they face Malta in an international challenge match later today.

He insisted his side’s end of season friendlies, against the Maltese and then Ukraine in Dnipro on Thursday, represent an opportunity to build momentum ahead of World Cup qualifiers in the autumn.

Baraclough’s boys have been in Austria since Tuesday preparing for the behind closed doors friendly against Malta at the Wörthersee Stadium in Klagenfurt (5pm start UK time).

And he likes what he has seen in training. He says the players are hungry to do well and to get wins under their belts.

“We want to come out with two positive results and I think we've got a squad capable of doing that, starting against Malta,” he said at a press conference yesterday.

"We need to prepare properly and the guys have worked really hard to do that. It's certainly not been an end of season tour where everyone is enjoying themselves.”

We want to come out with two positive results and I think we've got a squad capable of doing that, starting against Malta

Baraclough’s squad is a blend of youth and experience and his starting line-up against Malta looks set to reflect that.

The team will be captained by Leeds United midfielder Stuart Dallas, who will be wearing the armband for a second time; the first was in a UEFA Nations League game against Austria in November.

“He's proven to be a leader in the group, he leads by example. For me, it was a natural choice and he's the right person,” the manager insisted.

His captain is also adamant the senior men’s team will be going all out to win both games.

"We're sacrificing a lot to be here so we're coming out with the aim of winning the two games,” he said.

"We want the right culture in the squad and that means turning up for these trips. It's important as a senior player that you set an example to the younger players.

"No matter what level you play at, you have to win games and we haven't been doing that recently. We've had some decent performances so we feel that we're not far away."

Prolific Linfield striker Shayne Lavery has been allowed to stay at home to enjoy Linfield’s title celebrations and get a well earned rest following a demanding season, while Kilmarnock forward Kyle Lafferty is not due to meet up with the group until later today.

However, Baraclough believes he has enough firepower in his squad to cause the Maltese problems. Hull City’s Josh Magennis, Hearts striker Liam Boyce and Accrington Stanley frontman Dion Charles have all enjoyed strong seasons in terms of hitting the back of the net.

Malta, managed by Italian Devis Mangia, try to play expansive football and Baraclough says Northern Ireland will have to be wary of their counter attack prowess.

Mangia has a relatively inexperienced panel to choose from. Unlike Northern Ireland, who have a handful of players in the squad with more than 50 caps, and a couple of others close to that mark, Malta only have one player in their ranks who has reached the 50-cap milestone.

Their most experienced player is defender Andrei Agius (34), who will actually earn his 99th cap for his country if he plays today.

And if midfielder Rowen Muscat lines out against the boys in green and white he will win his 50th cap. None of the other players in the Malta squad have reached the 30-cap milestone yet.

Teddy Tuema, a midfielder with Belgian side Union SG, is the only member of the Malta squad who plays his club football outside Malta.