Northern Ireland edged out against USA 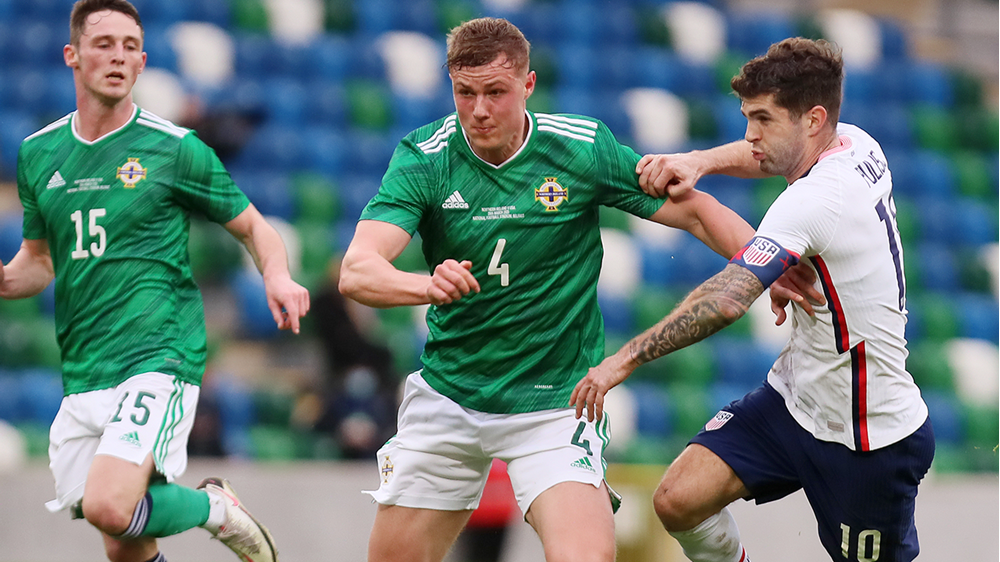 Northern Ireland were defeated 2-1 by United States of America in a challenge match in Belfast this evening.

Goals from American strikers Giovanni Reyna and Christian Pulisic (penalty) secured the victory for the visitors, with Northern Ireland pulling one back late on thanks to a superb strike from substitute Niall McGinn.

The game at the National Football Stadium at Windsor Park was the first meeting between the two countries at senior international level and it was a pretty lively encounter. 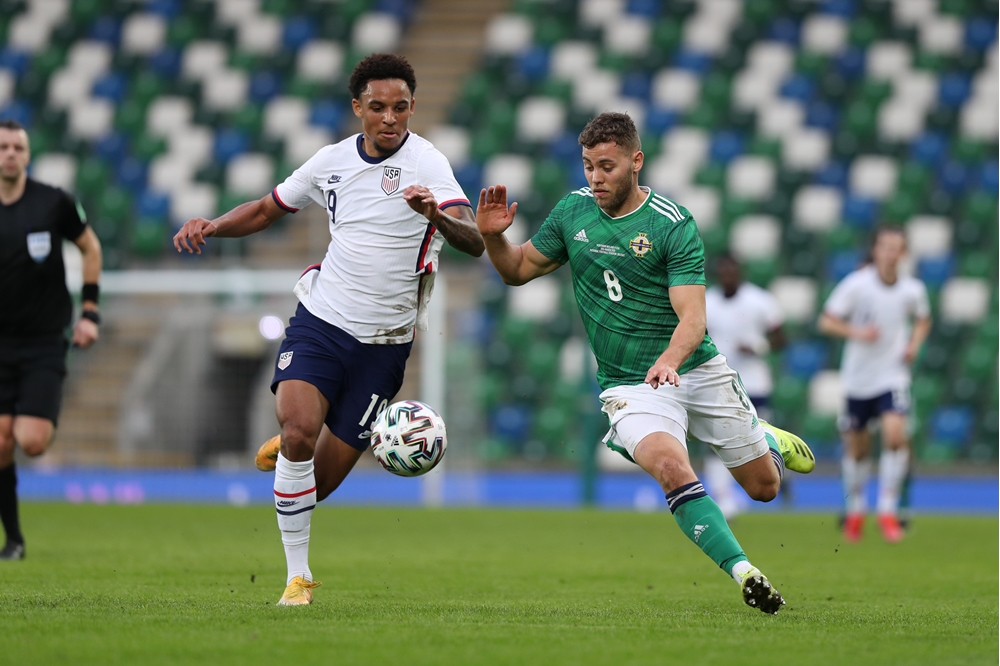 Corry Evans was the only Northern Ireland player who started against Italy in a World Cup qualifier on Thursday, while regular captain Steven Davis and vice captain Jonny Evans were left out of Ian Baraclough’s squad.

The Americans, by contrast, fielded a strong starting eleven peppered with players who play for big European clubs.

US wing-back Antonee Robinson produced a decent delivery across the face of the six-yard box in the opening exchanges but the first clearcut chance of the game fell to Kyle Lafferty, who was captaining Northern Ireland and earning his 81st cap for his country. George Saville’s slick pass put the striker clear of the American defence but he pulled his shot wide of the post.

Then Corry Evans produced a decent strike as the American defence cleared a corner, however his rising effort flew just over the top.

Stars and Stripes captain Pulisic almost breached the home defence on a couple of occasions, however Daniel Ballard in particular produced some fine interceptions.

Northern Ireland had a flurry of set-pieces but the US defence held firm, with Matthew Miazga imperious, and then USA took the lead against the run of play through Reyna on 29 minutes. Tim Ream slipped the ball to the unmarked Reyna who let fly from 22 yards. His shot deflected off Ciaron Brown and looped over Conor Hazard’s head into the net.

In the 37th minute Shayne Lavery, who was full of running, produced a clever low drive which was palmed away by US keeper Zack Steffen.

Just after the break Brown thwarted Reyna as he bore down on goal, although the Americans doubled their lead on 59 minutes when Pulisic scored from the spot. The penalty was awarded when Ballard was adjudged to have scythed down Pulisic inside the area.

Dion Charles, one of four Northern Ireland subs introduced just after Pulisic’s goal, had his first strike at international level five minutes later. Lafferty teed him up just outside the area and Charles curled his shot inches wide of the upright.

Three minutes later, after a jinking run, the debutant had another effort, but this time his shot was straight at the keeper.

In the 80th minute Hazard got down well to keep out a low shot from USA substitute Daryl Dike and moments later he held a rasping drive from another US sub, Sebastien Lletget.

McGinn pounced in the 88th minute to blast the ball home from a tight angle. It was a lovely finish as he got on the end of a Lafferty flick-on.

As the game drew to a close Hazard saved bravely at Robinson’s feet after the wing-back had produced a long-busting run towards goal.

Baraclough’s so-called fringe players put in a decent shift against an energetic US team.

Northern Ireland and Baraclough will now turn their attention to a FIFA World Cup 2022 qualifier - their second game in European Qualifying Group C - against Bulgaria in Belfast on Wednesday.