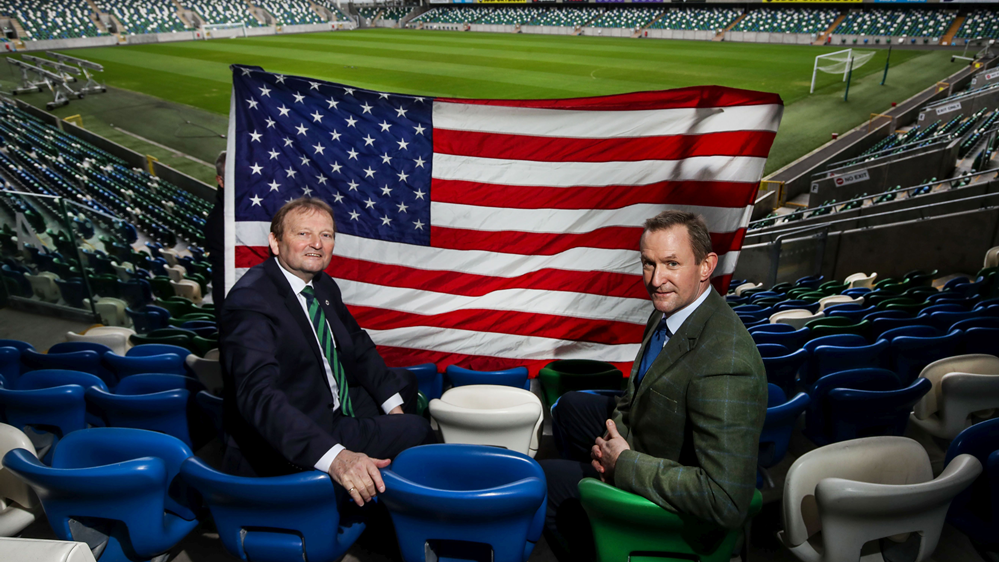 Irish Football Association President David Martin was paid a special visit in the lead-up to Northern Ireland’s friendly international against the United States of America in Belfast today.

The Acting American Consul General in Northern Ireland, Bryan Wockley, presented a US flag to Mr Martin to mark the first match between the two countries at senior international level.

The Stars and Stripes flag will be flown over the National Football Stadium at Windsor Park during the game, which kicks off at 5.05pm.

Mr Wockley said: “We are delighted that our men’s senior soccer team are making the trip to Belfast to play Northern Ireland and thank the Irish Football Association for its role in making this fixture possible.

“Understandably circumstances will not allow our travelling supporters to experience the fantastic atmosphere of Windsor Park but we hope our two teams meet again under better circumstances in the World Cup.  We wish Northern Ireland every success in the qualifying campaign.”

Welcoming the USA players and officials to Northern Ireland, the Irish FA President said: “I hope it is an exciting game of football and that our American visitors enjoy their stay with us.

“Unfortunately, due to ongoing Covid restrictions, there will not be any fans in the stadium for the match and that’s a great shame, especially as both sets of supporters are known for being colourful and exuberant. Some razzmatazz would have been most welcome.

“However, we are mindful that Covid is still very much with us and we must remain vigilant in the battle to stop its spread.”

Image: Acting US Consul General Bryan Wockley (right) presents a US flag to Irish Football Association President David Martin. The flag, which has flown at US Embassies, will fly at the National Football Stadium at Windsor Park during today’s international friendly between Northern Ireland and USA.