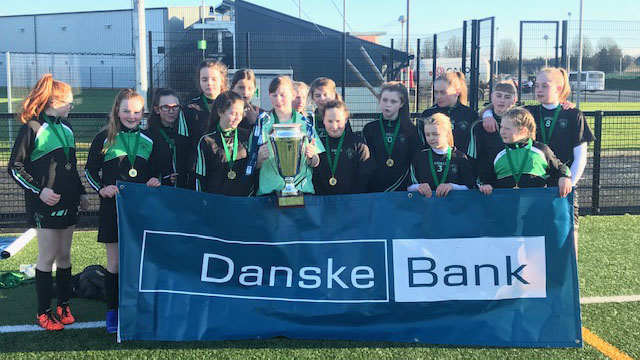 St Louise’s Comprehensive College were in scintillating form as they won this year’s Danske Bank Under-15 girls’ 11-a-side competition.

The school from Belfast’s Upper Falls strolled through round-robin games, scoring numerous goals along the way, navigated a penalty shoot-out to reach the final and then bossed the decider, defeating north Belfast school Mercy College 3-0.

Unfortunately poor weather meant 2018 winners Holy Cross College (Strabane) were unable to make it to Allen Park in Antrim for this year’s finals in the NISFA competition. And snow also meant St Cecilia’s (Derry-Londonderry) and St Brigid’s College from Derry could not make it either.

The organisers decided to play round-robin matches for the five other quarter-finalists, with the top four U15 teams going through to the semi-finals.

St Louise’s defeated Tyrone’s Aughnacloy College 6-1 in their opening match before registering a 2-0 win over Laurelhill Community College (Lisburn). Their third game saw them ease past St Joseph’s Belfast 2-0 and then they hammered Mercy College by six goals to nil.

St Louise’s topped the round-robin group, while Laurelhill finished second following a 2-2 draw with St Joseph’s, a 3-2 win over Mercy College, a 3-0 victory against Aughnacloy and their defeat to St Louise’s.

In the semi-finals St Louise’s struggled to break down St Joseph’s and the game went to a penalty shoot-out, which St Louise’s won 3-2.

In the other semi-final Laurelhill thought that they had done enough to progress, however a late Mercy goal was enough to force the tie to penalties. And Mercy prevailed 3-1 on pens in the shootout.

The final between St Louise’s and Mercy College was a much tighter affair than their round-robin game, however St Louise’s again came out on top.

The West Belfast school took the lead on the stroke of half-time when Caitlin Magill slotted the ball home. After the break Mercy pushed forward in a bid to get back into the game, however Chloe Davis scrambled in a second for St Louise’s midway through the half.

And with what was virtually the last kick of the match Magill grabbed her second, with a well-placed low drive, to make it 3-0 to St Louise’s.