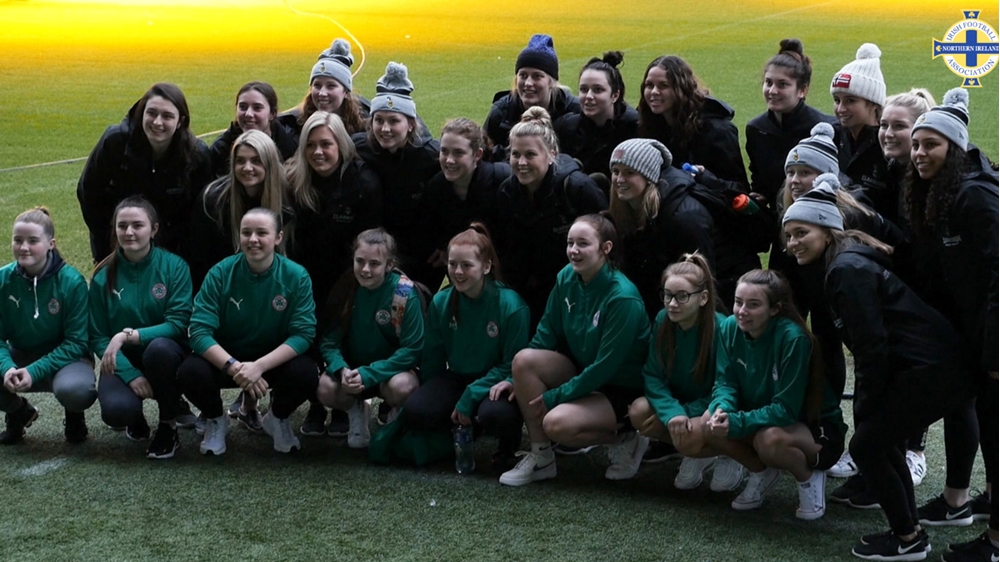 Members of the top women’s college ice hockey team in America have enjoyed a visit to the National Football Stadium at Windsor Park.

The Clarkson University squad toured the stadium and rubbed shoulders with players from Cliftonville Ladies, Crusaders Strikers and Glentoran Women.

Their visit, which was facilitated in partnership with Belfast Giants, formed part of a programme called Grit And Goals launched by the Irish FA Foundation last year.

The main theme of the programme is to inspire 16-year-old female footballers from Northern Ireland andhelp them focus on setting sporting, academic and career goals.

And during their visit four players from Clarkson, which is based in Potsdam in New York state, took part in a question and answer session with the footballers which focused on their career paths, training schedules, overcoming adversity, nutrition, what it takes to be an elite athlete and their short term and long term goals.

Taking to the stage at the media centre in the National Football Stadium were Clarkson forward Elizabeth Gigeure, netminder Kassidy Sauve and forwards Taylor Sawka and Loren Gabel, who also plays for Canada’s Under-22 women’s ice hockey team.

Clarkson, the reigning Division One champions in National Collegiate Athletic Association (NCAA) women’s ice hockey in the US, are set to play in Belfast this weekend.

They will be taking on rivals Northeastern University in two non-conference games prior to Belfast Giants’ matches against Sheffield Steelers in the Elite League.

The first ever global NCAA women’s ice hockey games are being staged at the SSE Arena on Saturday at 3pm and Sunday at noon. Admission to both games is free.

The games between Clarkson, who have been top dogs out of 38 Division One college teams in the US in three of the past five years, and Boston-based Northeastern, the Hockey East conference champions in 2018, are expected to be action-packed encounters.