Belfast and Larne to host Schoolboys internationals later this month 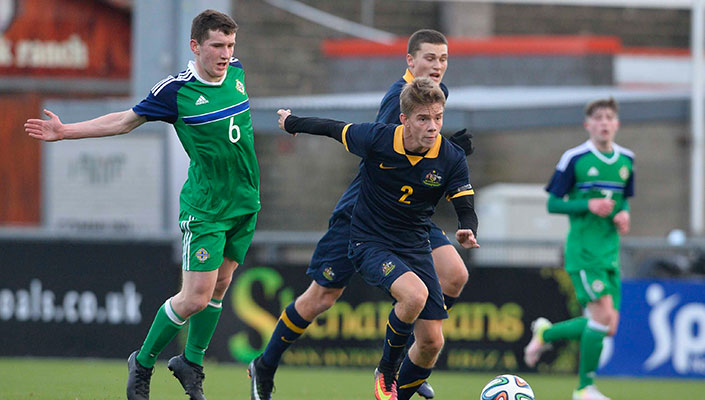 Northern Ireland’s Schoolboys international teams will both be in action against Australia Schoolboys later this month.

The latest Under-16 and Under-18 Schoolboys squads, which will be revealed later this week, have been assembled following extensive trials across Northern Ireland.

The U16s are due to face the Australians at New Midgley Park in Belfast on Monday 21 January (7pm start) and the U18s will be taking on their Australian counterparts at Inver Park in Larne on Tuesday 22 January (11.30am kick-off). Entry to both games is free.

The two Schoolboys teams, which are run by the Northern Ireland Schools’ FA with support from the Irish Football Association, will be playing a series of internationals this year.

The U18s will also be gearing up for the Centenary Shield campaign this spring, while the U16s will be vying for the Victory Shield in the autumn and will no doubt be trying to emulate the 2018 squad who won the trophy. Northern Ireland have only secured the shield twice in the 73-year history of the competition.

Northern Ireland U18 Schoolboys manager Frankie Wilson said he is looking forward to the games ahead – and can’t wait to get started.

He pointed out: “We have had various trials across the country since October with over 150 boys being given the opportunity to vie for a place in the Centenary Shield squad. The players for the Australia game have been notified and I would like to thank all the players that have attended the process.”

He also revealed the U18s management team will be scouting at Irish League grounds and school games across the country in the coming months to ensure that the best players are getting a chance to play for Northern Ireland.

Wilson further said he hopes his players can follow in the footsteps of those that started their international careers at Schoolboys level, including Gavin Whyte (Oxford United), Paul Smyth (QPR), Bobby Burns (Hearts) and Brad Lyons (Blackburn Rovers) as well as Northern Ireland captain Steven Davis, who picked up a Victory Shield winner’s medal in 2000-01.