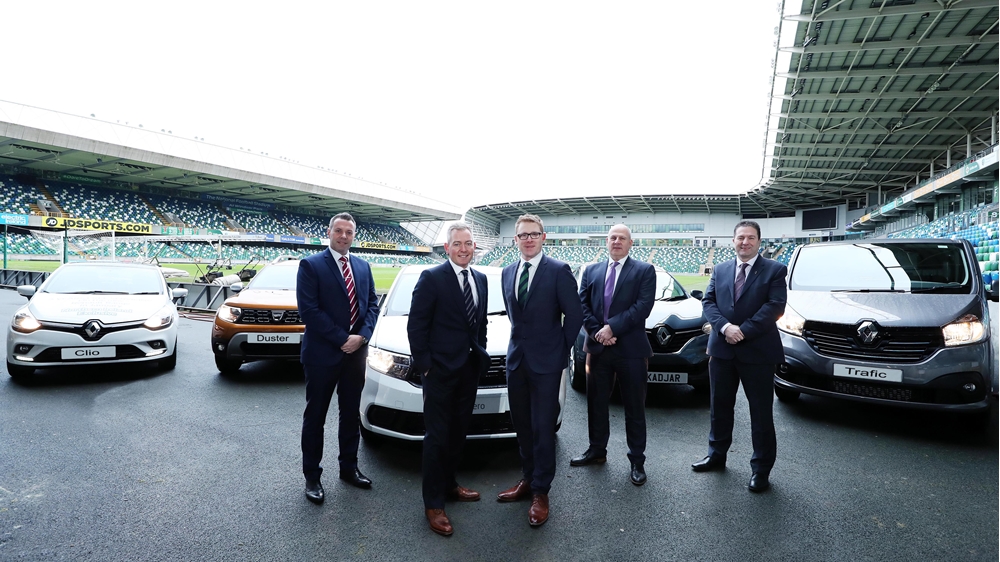 Charles Hurst has scored a strong start to 2019 with an exciting announcement made this morning (25thJanuary).

The car retailer has agreed terms on an exclusive new partnership between Renault and the Irish Football Association. Renault will be sponsoring the Irish FA, providing the association with cars as part of the commercial package.

All squads within the Irish FA will benefit from the new sponsorship deal, including men’s, women’s and youth teams.

The sponsorship will support the Irish FA’s continuous development within the Northern Ireland community and pave the way for future partnerships between the Irish FA and Charles Hurst Renault.

This is the beginning to what is expected to be a successful tie-up between two well-loved brands within Northern Ireland.

Colin McNab, Franchise Manager, of Charles Hurst Renault said: “Here at Charles Hurst we pride ourselves in supporting community-centred groups through our roster of vehicle brands. The Irish Football Association is an organisation that we have a lot of admiration for and is a great example of one that has a positive impact on communities here in Northern Ireland.

“We’re extremely excited for this opportunity to support such a widely respected organisation and are looking forward to developing the relationship between Renault and the Irish FA in the near future.”

Simon Fitzpatrick, Director of Sales & Marketing at the Irish Football Association, said of the partnership: “The association is delighted to have a big Northern Ireland company like Charles Hurst joining our squad of sponsors. And it also means, of course, that we have global car brand Renault on board. We are confident this deal will be a win-win for both organisations.”