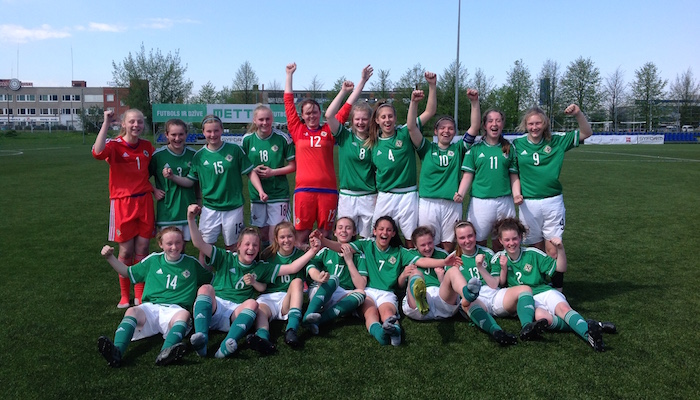 Congratulations to our U16 Women's Squad who won the Under 16 Development Tournament in Latvia.

The team, coached by Noel Mitchell, started the tournament with a convincing 5-0 win over Estonia with goals from Morgan Beggs, Emily Wilson (2), Louise Crawford and Abbie Magee.

The second match was a tougher test for the team as they showed great character to come from a goal down and beat the Faroe Islands 2-1. Emily Wilson continued her fine form from the opening fixture by scoring both goals.

In the final fixture against Latvia proved to be the tournament decider. The girls put in a great performance winning the match 4-1. A hat-trick from Wilson and another from Magee were the difference for the Northern Ireland girls. Wilson capped a fantastic individual performance  by finishing top goalscorer with seven goals.

All of the girls who played in the tournament came through the Irish FA Girls' Regional Excellence Programme.

Women's Manager Alfie Wylie was full of praise for the squad and coaches after the very successful trip.

"Congratulations to the team and Noel Mitchell, who did a fantastic job. Most of the girls are a year young and will play in the U17 UEFA Championships in September.

"This squad is big positive for the Irish FA, as the structured elite pathway through the system highlights the great work of the regional and international coaches."