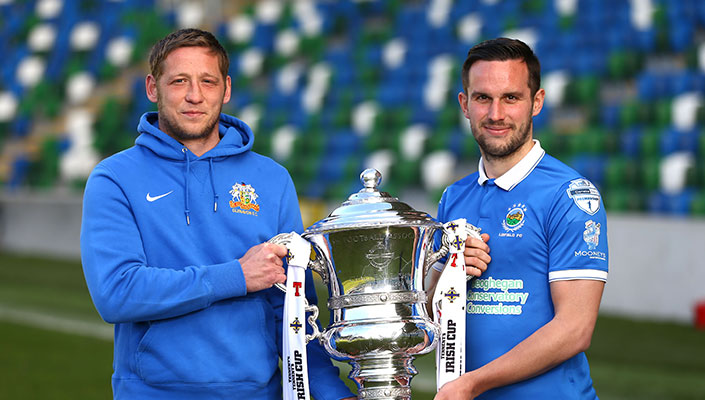 This is it. This is the big one. This is the Tennent's Irish Cup final. The end of season day out that every fan of every club longs to experience.

And for those who hold Glenavon and Linfield in their hearts it's the dream they're going to be living over the next few days, building up to a crescendo of noise and emotion come the 2:30pm kick-off on Saturday afternoon.

It's the build-up, the specially commissioned shirt, the bunting in club colours, the buses booked, the flights home, the what ifs. Heroes will be born, villains possibly made.

The sides lock horns at the National Football Stadium at Windsor Park with only one ambition in mind - to lift that most famous of old trophies and to stamp their place in history.

For Glenavon this could mean a second victory in three seasons, for Linfield their first since 2012. In a way the pressure is off. European football next season has already been secured via the league, so all that remains is to lift the Blue Riband trophy of local football.

Both semi-final victories were very much the story of one man in either team. Linfield can point to Aaron Burns' second-half hat-trick which snuffed out the Lurgan Celtic fairytale while Kevin Braniff was the stand-out hero for Glenavon on a night of heroes as he bagged all four goals in that rip-roaring defeat of Crusaders.

Gary Hamilton's side produced a workmanlike but straightforward defeat of Loughgall in the last eight while David Healy's charges knocked three without reply past Cliftonville at Solitude with a Ross Gaynor double coming either side of an Andrew Waterworth strike.

Indeed, Waterworth was instrumental in the 7-0 sixth round thumping of Armagh City, laying down a marker with two goals in each half whereas for Glenavon their four goals in the win over Glentoran at The Oval came from four different players - Rhys Marshall, Ciaran Martyn, Eoin Bradley and Joel Cooper.

Bradley and Hall got amongst the goals in the fifth round as HW Welders were safely swept aside but Linfield needed an extra-time Guy Bates winner to overcome Ballymena United.

Ironically, it'll be the second time in as many weeks the sides will have met but last Saturday's Danske Bank Premiership encounter was little more than a phoney war, given the number of young players named in both panels. For the record Linfield won that one 1-0 but both starting XIs will look very different come Saturday afternoon.

That game aside, both the Belfast and Lurgan Blues are tied on one win apiece this season, both much earlier in the campaign, with the other game - a draw - coming in late February.

There are no clear favourites, this one is delicately poised.