Boys Across The Water - May 16 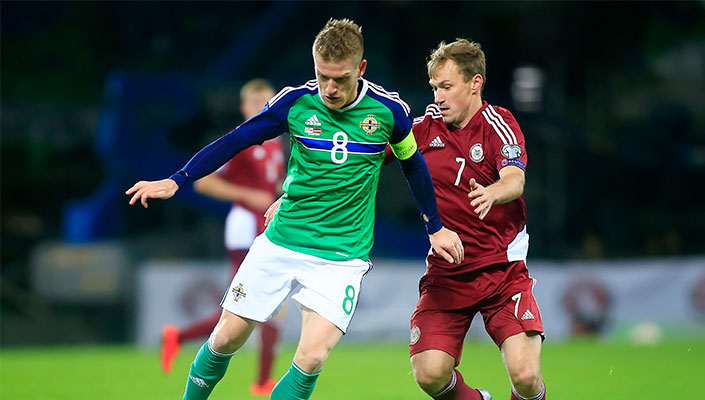 Northern Ireland captain Steven Davis rounded off the domestic season in fine style at the weekend when he scored in Southampton’s 4-1 win over Crystal Palace at the St. Mary’s Stadium.

The 31 year-old, who found the net three minutes from the end of the Saints final Premier League outing of the season, is now looking forward to Europa League action with the South Coast club next term.

“Europa League is the next step up for us,” said Davis, “and that’s what we set out to do at the start of the season, it’s great to achieve that and we can look forward to that for next season.

“Hopefully the summer is going to be a little bit quieter than normal and we can keep the squad together and maybe add one or two to the group that we’ve already got.

“There have been some good positive signs on that already with Virgil, Fraser and Prowsey signing longer term deals, so hopefully we can keep the manager here, look forward to next season and build again.”

Meanwhile in Scotland Liam Boyce ended the campaign with 20 goals to his name after getting on the scoresheet for Ross County who thrashed Aberdeen 4-0 at Pittodrie.

With the Northern Ireland squad for this summer’s EURO’s set to be announced on the 28th May, County boss Jim McIntyre firmly believes that the former Cliftonville striker has done enough this season to be included.

“It was great to see Liam Boyce get his 20th goal of the season,” said McIntyre. “To finish the season with back to back goals along with what he has done earlier in the season will be enough to get him in the Northern Ireland squad.

With the Play-off’s well under way a number of Northern Ireland players are seeking to end the season by playing on Wembley’s hallowed turf.

Unfortunately it will not be happening for Larne-born Adam McGurk though as his side Portsmouth went out 3-2 on aggregate to Plymouth Argyle in the League Two semi-final after losing the second-leg 1-0 at Home Park.

In the other semi-final Billy Kee and Shay McCartan were in the Accrington team that lost 1-0 to AFC Wimbledon.

There was better news though for Shane Ferguson as Millwall won the first-leg of the League One Play-Off semi-final 3-1 at Bradford City who included Rory McArdle in their starting line-up.