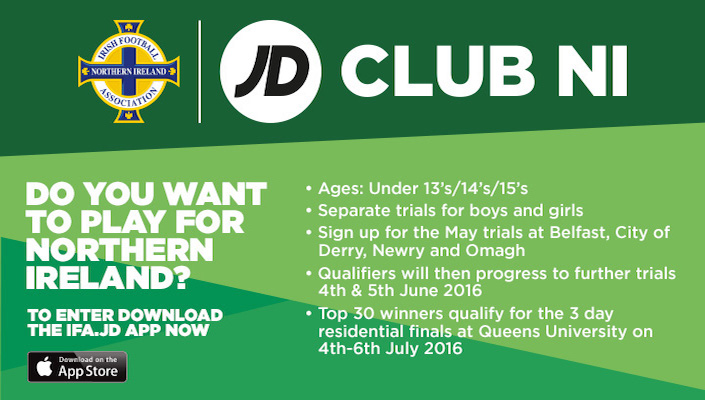 The Irish FA and leading sports fashion retailer JD have launched a new initiative which will offer kids at under 13, 14 and 15 levels the chance to become part of Club NI, the Irish FA’s Elite Performance programme.

The aim of 'Want To Play For Northern Ireland?’ is to uncover young talent who have the potential to represent Northern Ireland at future World Cups and European Championships.

The initiative offers an ideal platform to discover, nurture and develop footballing talent from across the country. In particular it hopes to attract sportspeople who may not have considered taking up football.

All kids need to do is download the IFA.JD app or enter instore at any of the 14 JD stores across Northern Ireland. Players will be invited to be part of training camps in May, before qualifying for further rounds in June and July.

Derry-Londonderry (21st May), Newry (22nd May), Belfast (28th May), and Omagh (29th May) will play host to more than 600 selected children for training camps where they will be under the watchful eye of Irish FA professional coaching staff.

The coaches will then select eight to ten finalists for each age group to progress to a JD Club NI training camp which will be rounded off with a match against the current Club NI squad.

He said: “It is exciting to have JD on board as a supporter of this opportunity as it will allow us to reach a wide range of sporting talent. When I was appointed Northern Ireland manager I had a very limited number of players to select my squad from.

I began to look very closely at the development pathway in place for our young players in Northern Ireland as this is fundamental to the success of our national team.

“This opportunity for kids to showcase their talents is fantastic for Northern Ireland football.” The closing date for applications is 15th May 2016.

For more information, please download the IFA.JD app from the Apple or Google app stores, or alternatively drop into any of the JD stores across Northern Ireland. Check www.jdsports.co.uk for your nearest store.