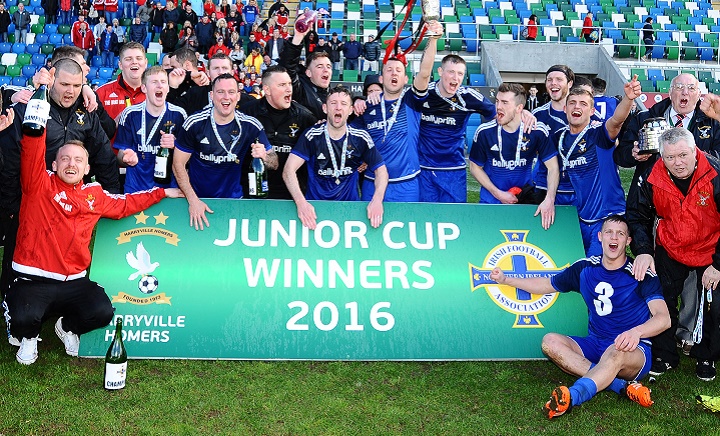 It was also a third successive crown for Robert Duddy's Homers and a second straight defeat for Greyabbey based Rosemount.

In front of a 799-strong crowd, the Homers got off to an ideal start when, after just one minute 52 seconds, Paul McNeill knocked the ball home after Alan Rainey had flicked it back.

The sides continued to trade chances during these early exchanges. Rosemount 'keeper Chris Rice did well to deny a Rainey effort while Miller beat the offside trap to get on the end of an Alan Eccles through ball before being denied by McCosh at the second attempt.

It was perhaps fitting, then, that player-manager Miller eventually did grab Rosemount's 24th minute equaliser after blasted the ball high into the net after a Nicky Eccles free-kick was only parried by McCosh.

Unsurprisingly after that frenetic opening the pace did slow as the first half progressed with chances becoming somewhat sparse at either end although McNeill might have restored Harryville's advantage just before the break only to fire over.

Rosemount might have snatched the lead early in the second half only for defender Ryan Stewart to clear a Gary Canmore effort off the line.

Ricky Nicholl came close to edging Harryville back in front a little while later wen his wind assisted cross clipped the woodwork on its way over the bar.

With the conditions playing an increasingly prominent role in proceedings both sides struggled in front of goal.

That all changed in the final few minutes when Bonnes struck twice in quick succession to ensure victory for the seemingly all conquering Homers.

He made it 2-1 on 84 minutes with a close range finish after Darren Campbell flicked on a David McWhirter cross before adding a third four minutes after that after being played through by McNeill.