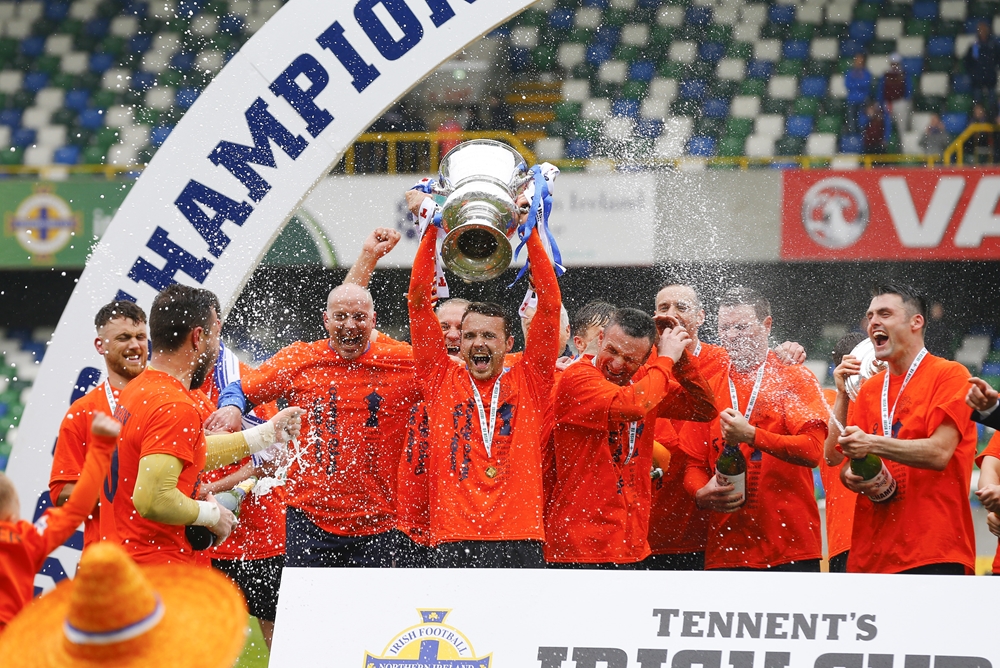 Two goals either side of the break helped Glenavon defeat Linfield at the National Football Stadium at Windsor Park to lift the Tennent's Irish Cup for the second time in three seasons.

Kevin Braniff struck on the stroke of half-time before, three minutes after the interval, Andy Hall added a second for a Glenavon side that, barring the opening quarter-of-an-hour, looked comfortable throughout.

Linfield started brightly, looking busy in all areas of the pitch, but the best they could muster was a 12th minute Stephen Lowry close range effort which Glenavon 'keeper Johnny Tuffey superbly poked away with a quick reaction stop on the line.

Gary Hamilton's side responded well to this early pressure, having the ball in the net soon after through Eoin Bradley only for referee Raymond Hetherington to spot an infringement to rule the effort out.

Joel Cooper then threatened for Glenavon but his effort curled wide of the target before a similar fate befell an Andrew Waterworth back post header.

But, just as it looked like the opening 45 minutes would end scoreless, up popped man-of-the-match Braniff at the far post to connect with a Bradley cross from the right to fire the opening goal into the roof of Gareth Deane's net.

Then, on 48 minutes, it was effectively game over. The ball arrived for Hall just outside the six yard box, he took one touch to control himself before firing left-footed well beyond Deane's reach into the corner.

The Blues almost responded within minutes but Aaron Burns could only look on in frustration as his well executed 30-yard free-kick was well tipped over by the impressive Tuffey.

However, Glenavon never really looked like losing control of this one, coming close through Bradley and then, later, Braniff.

As expected, Linfield did try to claw their way back into the game as things progressed with Ross Gaynor testing Tuffey with a header while Waterworth fired over at the near post.

Braniff almost added a third for Glenavon late in the game after finding himself clear and through on goal only to fire wide with just Deane to beat.

But it was immaterial. This was Glenavon's day and nothing was going to change that.