Gerard Lyttle appointed as Northern Ireland’s U19 and U17 manager

The Irish Football Association has appointed Gerard Lyttle as the new manager of Northern Ireland’s Under-19 and Under-17 men’s teams.

Lyttle steps up from the Irish FA JD Academy in collaboration with UEFA, based at Ulster University’s Jordanstown campus, where he was head coach. He was also previously in charge of Northern Ireland’s U16 team.

The former Cliftonville and Sligo Rovers boss said he was “very excited” at being given the opportunity to manage Northern Ireland’s U19s and U17s.

He explained: “This was a job I thought about an awful lot over the course of the past year or so. It’s a natural progression from the job I currently have as head coach with the JD Academy and the U16 national squad.

“There’s that often used saying when managers or players take a new job that they can’t wait to get started but I can honestly say that my work started when I was accepted for my first interview for this role last month.

“There’s no doubt that there is a lot of hard work ahead but this is something I’m used to and will never shy away from.”

His first task along with his backroom staff will be preparing the U19s for three UEFA U19 European Championship qualifiers in Sweden next month.

Northern Ireland senior men’s team manager Ian Baraclough welcomed the appointment. “Gerard is well known and respected throughout the game in Northern Ireland and knows the current group of players in these squads well having worked with them for two years,” he said.

“I’m really pleased for him and look forward to working with his staff closely to help develop this exciting crop of Northern Ireland talent.”

Lyttle started his coaching career in 2009 with Belfast-based junior club Malachians before joining the coaching set-up at Cliftonville under the late Tommy Breslin where he helped coach the team to back to back league and League Cup doubles.

He was subsequently appointed manager of the Reds in October 2015 and won the League Cup with them in 2016 and in the same year won a play-off to qualify for the Europa League.

He resigned from Cliftonville in April 2017 to take the post of full-time manager at League of Ireland Premier Division club Sligo Rovers. He left Sligo in October 2018 before joining the Irish FA as a senior coach.

During his playing days Lyttle initially joined the ranks of Belfast side Star Of The Sea before signing a professional contract with Celtic in December 1994.

After making several appearances for the Glasgow club’s youth teams and Reserves - he was a midfielder - he moved to Swindon Town on loan, however his time there was hampered by injury.

He left Celtic in 1998 and subsequently had spells with Peterborough United, Kingstonian and Northampton Town before returning home in 2000.

For the next six years he played in the Irish League with Ballymena United, Newry City, Cliftonville (two spells) and Distillery. He hung up his boots after a spell with Newington YC.

During his playing career Lyttle was capped eight times for Northern Ireland U21s and also received caps at U16 and U18 level. 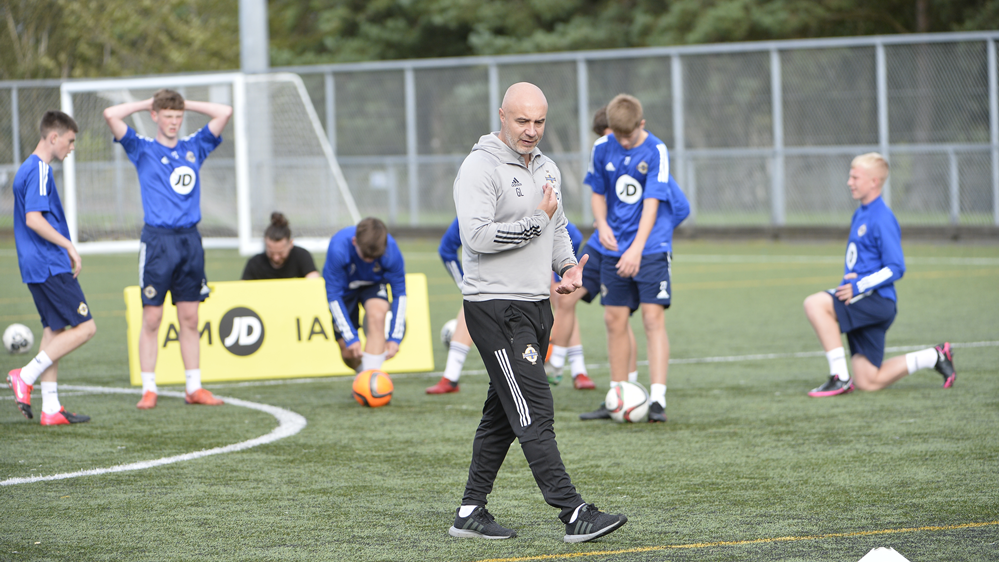 Above: Gerard Lyttle pictured during his time as head coach of the Irish FA JD Academy in collaboration with UEFA

This year’s U19 Euros are set to be staged in Romania in late June/July and Northern Ireland will be competing in Group 3 of the qualifiers (mini tournament) alongside hosts Sweden, Austria and Gibraltar, with the games due to be played from 24 to 30 March.

The winners of 13 qualifying groups will then join top seeds Portugal in play-offs in May and June which will produce Romania's seven finals opponents.

Later this year the U19s will play Czech Republic, Denmark and Kazakhstan (Group 13) in a four-team mini tournament in the qualifying round for the U19 Euros in Slovakia in the summer of 2022. Those games will be played from 6 to 12 October in the Czech Republic.

In the UEFA Under-17 Euro 2022 preliminary round the boys in green and white are set to face Italy, Scotland and Albania (Group 12). And the matches will be played in Northern Ireland between 27 October and 2 November. Israel are due to host the U17 Euros in May 2022.