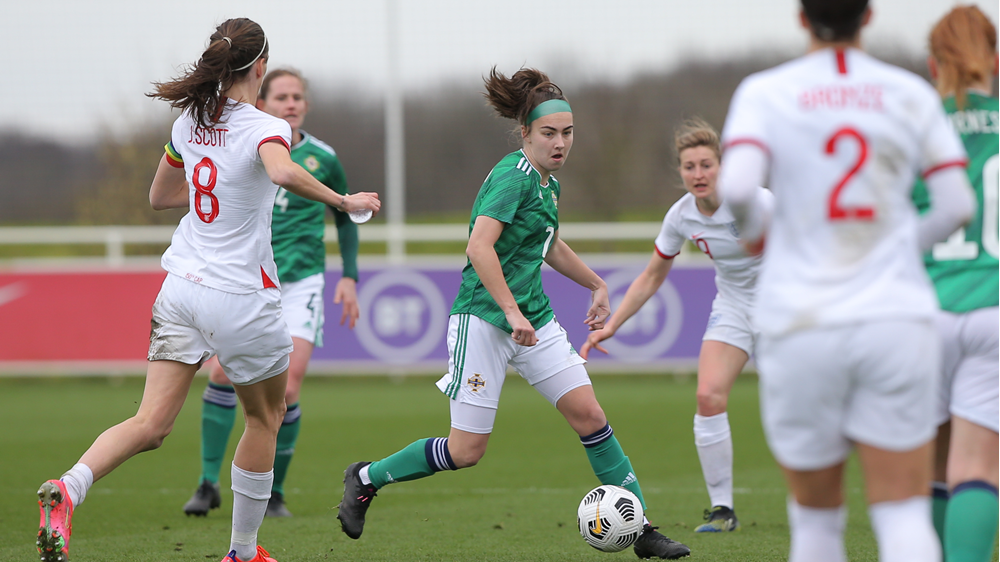 Northern Ireland’s senior women’s team were beaten by England Women in a challenge match this afternoon.

Experienced striker Ellen White bagged a hat-trick in the behind closed doors friendly at St George’s Park as the Lionesses ran out 6-0 winners in blustery conditions.

Wing-back Lucy Bronze, FIFA’s world player of the year in 2020, also got on the scoresheet along with winger Rachel Daly and debutant Ella Toone.

Eight of England’s starting eleven are on Manchester City Women’s books, including White and Bronze, and the gulf in class between the teams was evident throughout the encounter at the FA’s National Football Centre in Staffordshire. 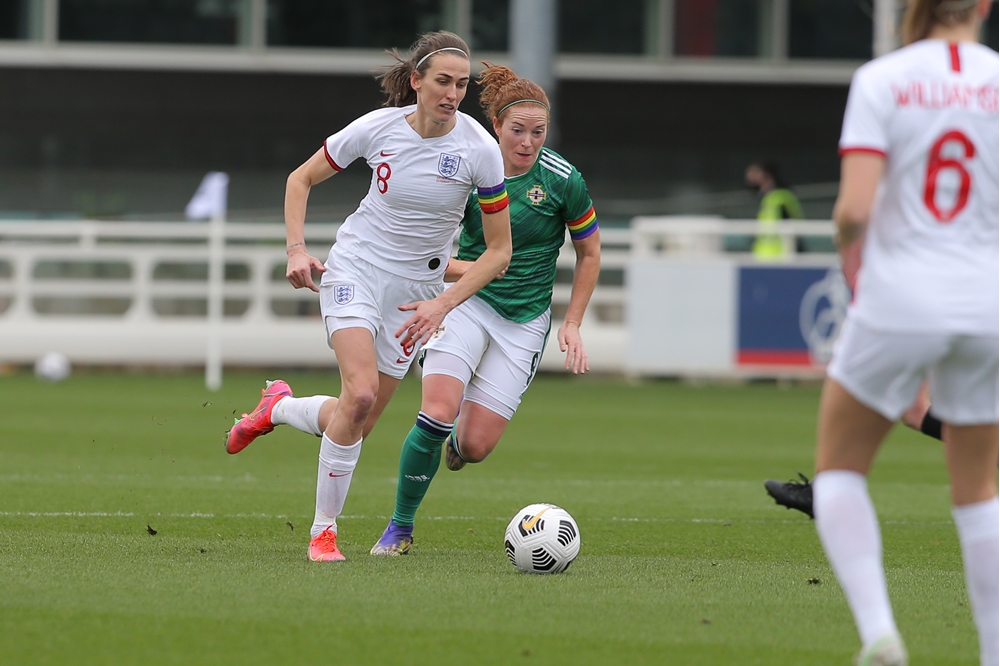 Northern Ireland, missing a handful of players due to injuries and work commitments, found it difficult to cope with England’s attacking threat as they were stretched and pulled all over the pitch.

However, Kenny Shiels’ side battled hard and defended well at times and the Northern Ireland manager will take positives from what was a gritty performance ahead of the Women’s Euro 2022 play-offs in April.

The first chance fell to the hosts in the third minute. Bronze floated the ball into the area and White headed wide. Minutes later Northern Ireland keeper Becky Flaherty made a great save at the feet of White after she was played in by Jill Scott, who was England captain for the day as she earned her 150th cap for the Lionesses.

In the eighth minute Flaherty produced a fine point blank save from a close range Bronze header and then Northern Ireland centre back Julie Nelson made a great clearance as England threatened again.

Daly fired over the top before White opened the scoring for the Lionesses on 18 minutes. The striker pounced on a loose pass from Northern Ireland midfielder Chloe McCarron and coolly slotted the ball past Flaherty into the corner of the net.

White doubled the lead five minutes later. Bronze darted down the right flank and whipped in a pinpoint cross which White nodded past the keeper from close range.

Northern Ireland were under the cosh as England, with the wind at their backs, piled forward and in the 29th minute the hosts made it 3-0. Lauren Hemp took advantage of a defensive mix-up, nipped in down the left and stroked the ball into the six-yard box where Bronze was on hand to slam it home.

On 36 minutes Jordan Nobbs picked out Hemp with a clever cross from a free-kick but Hemp headed wide of the post and then Flaherty kept out another White strike.

At the start of the second half Northern Ireland defender Abbie Magee, who had a fine game, made a good interception as England applied further pressure before substitute Toone fed White and the striker scooped her effort wide.

However, White would not be denied and she completed her hat-trick on 48 minutes. Scott played the ball into the area and the striker cleverly spun away from her marker before smashing the ball past Flaherty into the roof of the net.

Then Rebecca Holloway, making her debut for Northern Ireland, shielded the ball well as White tried to get on the end of a slick Georgia Stanway pass.

In the 67th minute Bronze produced another superb delivery down the right and Daly tucked the ball home from close range to make it 5-0 to the Lionesses.

Substitute Chloe Kelly curled a shot wide before Holloway tugged her shirt inside the penalty area and the resultant spot kick was stroked in by Toone to make it 6-0.