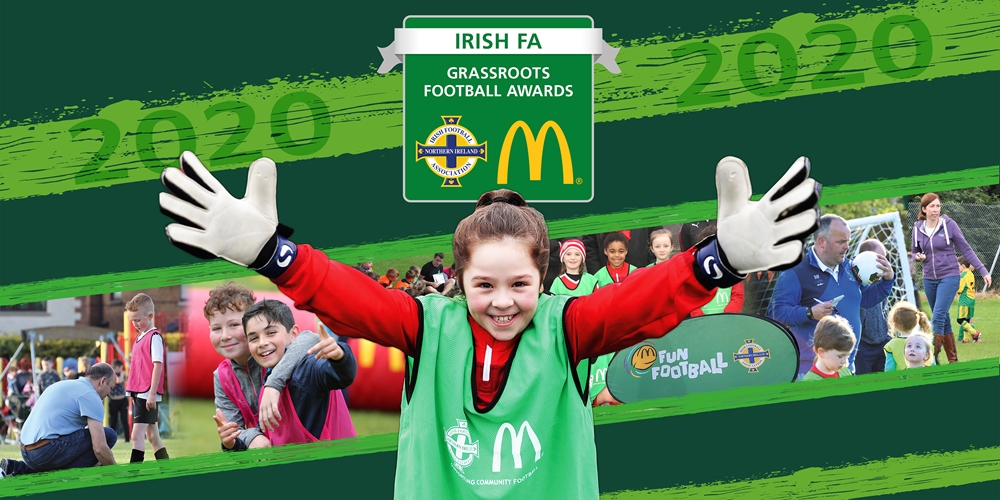 The winners of the McDonald’s Irish FA Grassroots Football Awards for 2020 have been announced - following a virtual awards ceremony.

Due to Covid-19 the 2020 awards gala was postponed and was streamed online instead to showcase those who have dedicated hours of their time for the good of grassroots football in Northern Ireland.

The 2020 winners in each category were:

People’s Award winner Billy O’Flaherty MBE is a founding member of Carniny Amateur and Youth Football Club in Ballymena and is widely regarded as a football stalwart in the Mid-Antrim area having been involved in grassroots football for over four decades.

Billy was also a founding member of the Allstars female football team in Ballymena and has recently played a key role in setting up a veterans team at Carniny in the Co Antrim town.

He said: “I’m humbled to receive this award, and I would like to thank my family and all of the coaches and volunteers that have worked closely with me down the years.

“Local football has been one of the best tools for cross-community relations in Northern Ireland and we must not underestimate that. Football is often the common denominator that brings people from all walks of life together, which has helped us take great strides over the years towards becoming a more inclusive society.”

'Each year when the awards come around I am humbled by the dedication, passion and enthusiasm of our grassroots volunteers, but none more so than in 2020, which was an extremely challenging year for us all' - Pat Jennings

McDonald’s Fun Football ambassador Pat Jennings insisted the awards provide a great opportunity to celebrate the fantastic work that takes place at all levels of the grassroots game in Northern Ireland.

He said: “Congratulations to all of our regional and national award nominees, and in particular the winners, who all work tirelessly in the background of their clubs to keep the local grassroots game alive.

“Each year when the awards come around I am humbled by the dedication, passion and enthusiasm of our grassroots volunteers, but none more so than in 2020, which was an extremely challenging year for us all.

“I look forward to celebrating with all of the award nominees and winners in person when it is safe to do so and hope to welcome you all to our exciting McDonald’s Fun Football and Small-Sided Games initiatives when ongoing restrictions allow.”

Through the McDonald’s Fun Football programme more than 75,000 children from across Northern Ireland will benefit from 250,000 hours of coaching, games and fun by 2022.