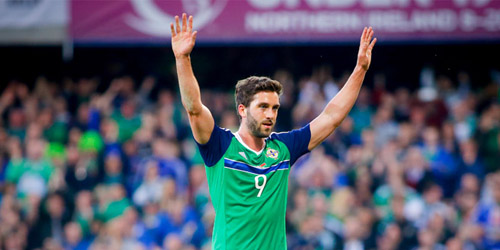 Striker Will Grigg has returned to MK Dons for a second spell after signing for the League One outfit on loan from Sunderland until the end of the season.

During his first spell at the club he scored 22 goals in a half century of appearances and was their leading scorer as they won promotion to the Championship in 2015.

Speaking to the MK Dons website, Northern Ireland international Grigg expressed his delight at returning to the club.  “I’m so pleased to be back. I’m grateful to everyone at the Club for getting this one over the line and I can’t wait to get going again,” he said.

'Anyone who knows me ... knows that if balls are put in the right areas for me, I will score goals. I’m feeling really good at the moment and I’m itching to get back playing'

“I absolutely loved my time here before. I had such a successful spell, scoring goals and winning promotion and, as soon as I knew about the interest, it was something I wanted to push through.

“Anyone who knows me from my time here previously, knows that if balls are put in the right areas for me, I will score goals. I’m feeling really good at the moment and I’m itching to get back playing.”

His new club boss Russell Martin said: “He’s had a difficult couple of seasons but, in my eyes, Will is still one of the best goalscorers at this level and I believe we are the right place for him to get going again. We look forward to working with him.”

Will Grigg has 13 international caps to his name, having made his Northern Ireland debut under Michael O'Neill in 2012. His last played for the senior men's team in October 2018 in a 1-0 UEFA Nations League defeat to Austria in Vienna.