It’s usually the fifth round of the Irish Cup - when the big boys enter the fray - that throws up a flurry of intriguing ties.

However, this season the sixth round of the competition, now known as the Sadler’s Peaky Blinder Irish Cup, has plenty of nuggets, too.

Rathfriland, who operate in the Amateur League Premier Division, are the lowest ranked team left in the cup. It’s also being seen as the biggest game in the Co Down club’s 60-year history as it’s the first time they have reached the last 16 of Northern Ireland’s premier cup competition.

Many eyes, meanwhile, will be on The Dub in south Belfast where Championship outfit Queen’s University put reigning Premiership champions Linfield to the sword in round five. It was one of the biggest upsets in the history of the Irish Cup.

This time around Peter Thompson’s team are once again up against NIFL top tier opposition. Glentoran, who are currently sitting top of the Premiership, are the visitors to the students’ home turf.

There’s also a fascinating local derby in Ballyclare where the Comrades, of the Championship, host Larne, who have defeated both the Blues and the Glens in the Premiership in recent weeks and are starting to show their true potential following their runaway Championship title success last season.

Cup holders Crusaders have a tricky tie away to Carrick Rangers to contend with. It’s one of two all-Premiership ties in the Sadler’s Peaky Blinder Irish Cup sixth round, the other one seeing Warrenpoint Town, semi-finalists last year, take on Ballymena United in South Down.

Coleraine, who along with the Crues are among the five teams cheek by jowl in the Premiership title race right now, welcome NIFL Premier Intermediate side Banbridge Town to the Showgrounds, while there’s also a top tier v second tier clash at Stangmore Park where Dungannon Swifts host Newry City.

Ballinamallard United, who lost out to Crusaders in last season’s final, are involved in an all-Championship tie.

The Mallards currently sit second in the Championship table, while their opponents, Knockbreda, are languishing at the foot of the standings, however Knockbreda will be hoping home advantage might just tilt the tie in their favour. 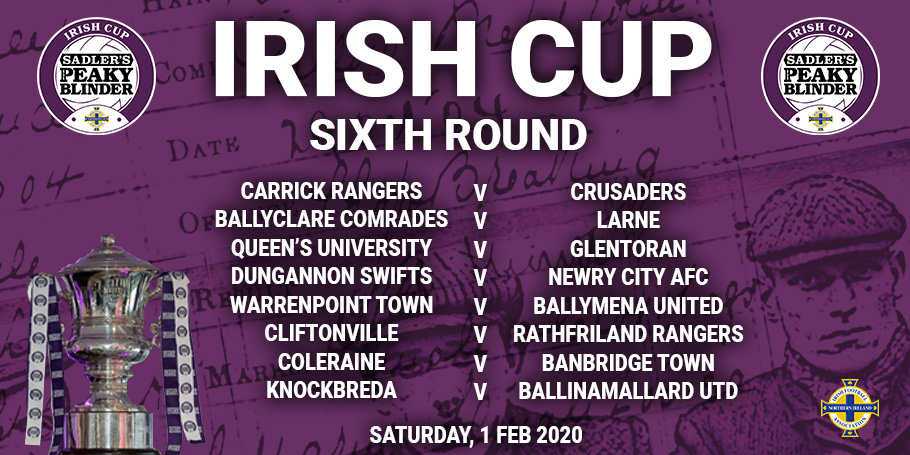