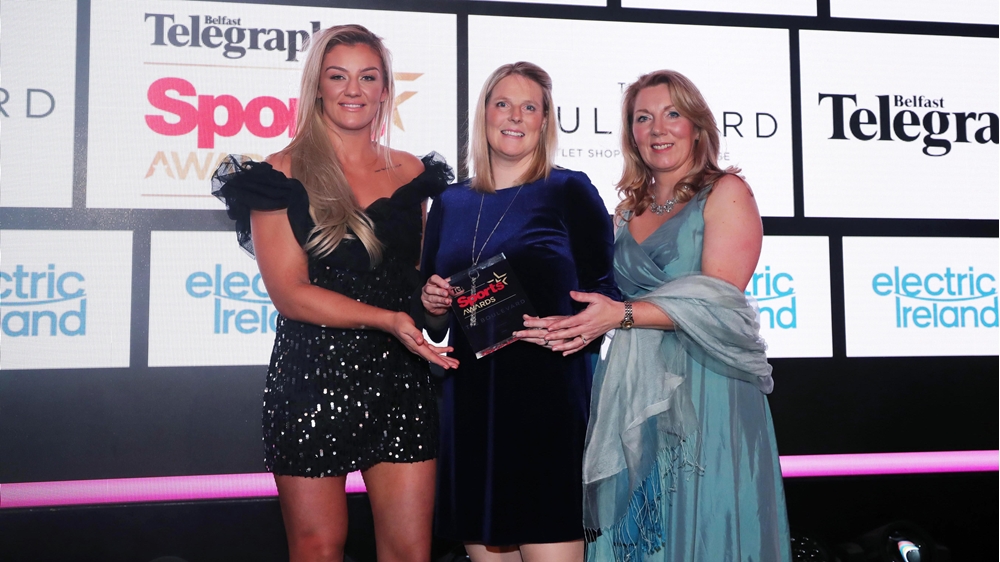 Gail Redmond, the Irish FA Foundation's Women's Domestic Manager, was among the prizewinners at the annual Belfast Telegraph Sports Awards.

Gail collected the Game Changer Award, sponsored by Electric Ireland, for her work in promoting women’s sport and football in particular.

The citation for the 2019 Game Changer gong explained Gail had worked in women's and girls' football in Northern Ireland throughout a distinguished career.

It read: “As a talented midfielder she captained Northern Ireland and has enjoyed similar success since hanging up her boots, coaching the Glentoran Women's team to a trophy treble in 2019.

“Through her role with the IFA Foundation, Redmond is committed to improving all aspects of women's and girls' football within Northern Ireland. Simply put Gail Redmond continues to be a Game Changer for women's sport.”

And Gail herself said: "When I heard I was nominated I was totally gobsmacked because they (the other nominees) are all so deserving of this award.

“It's been a long journey this past year because I've just had a baby so I'm just glad to be out on a Monday night. Thank you very much for this award. I'm completely shocked."

The Northern Ireland U18 Schoolboys’ team, meanwhile, picked up the Young Team of the Year gong.

The citation read: “Frankie Wilson’s team claimed the trophy (Schools’ Association Football International Board (SAFIB) Centenary Shield) with wins over the Republic of Ireland, Wales and Scotland as well as a draw against England.

“Boasting the likes of Glenavon's Patrick Burns (captain), Linfield's Jake Corbett and Portadown's Callum Ferris in their ranks, the squad secured the victory with a 3-1 win over Republic of Ireland on April 18th.”

Team captain Burns said: "It was a truly remarkable year. We met in Magherafelt every Sunday with the ultimate aim of winning the Centenary Shield. To do that was unbelievable. Seeing young players getting their chance under Michael O'Neill helps motivate and inspire us all."

Meanwhile, members of the Northern Ireland Powerchair football squad received a nomination for the sportsperson of the year with a disability trophy, which was lifted by swimmer Bethany Firth. Newtownards girl Bethany, who is a big Northern Ireland fan, was recognised after winning two gold medals and two silvers at the World Para-Swimming Championships.

And Northern Ireland defender Jonny Evans was among the nominees for the Dr Malcolm Brodie player of the year gong, which was won by cyclist Mark Downey, who won a bronze medal at the Track World Cycling Championships in Poland.

World Superbikes champion Jonathan Rea, who is a massive Northern Ireland fan, was once again the big winner at the Belfast Telegraph Sports Awards. He was awarded the Sports Star of the Year Award for the third year in a row.

And another high profile Northern Ireland fan, Irish rugby legend Rory Best, was inducted into the Belfast Telegraph Sports Awards Hall of Fame. The organisers noted the 37-year-old amassed a sizeable and hard-earned list of honours from his time playing and captaining both Ulster and Ireland as well as representing the British and Irish Lions.

The George Best Breakthrough Award was won by Banbridge rower Philip Doyle who along with double sculls partner Ronan Byrne won silver for Ireland at the World Rowing Championships back in September.