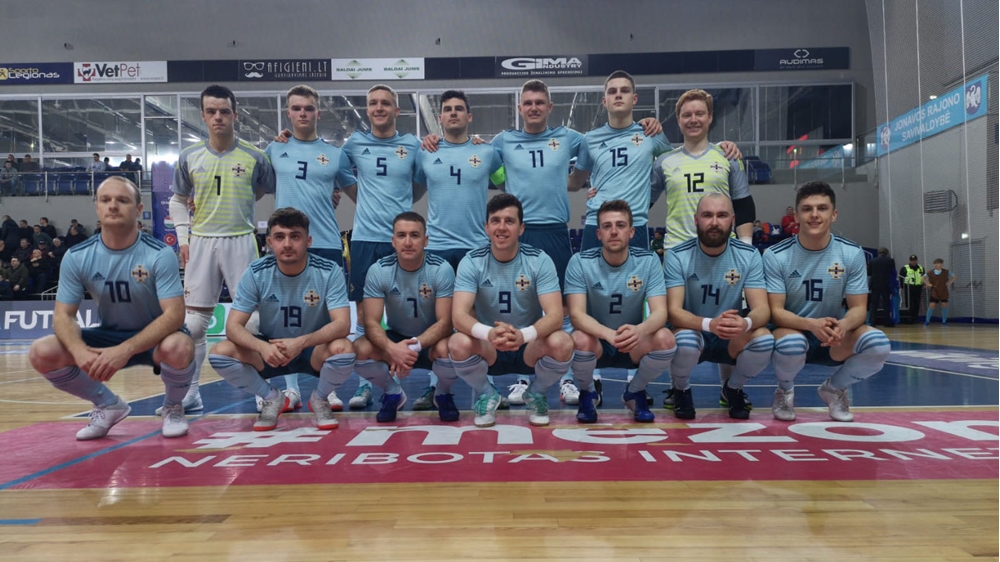 Northern Ireland’s men’s futsal team look unlikely to progress beyond the preliminary round of qualification for the 2022 Futsal Euros.

A second heavy defeat in two days means Jonathan Michael’s side’s hopes of progression to stage two of the qualifiers are hanging by a thread.

After losing 7-2 against Hungary in game one they were aiming to bounce back against Lithuania, who are hosting a four-team preliminary round mini tournament in Jonava this week.

However, despite creating several more opportunities than they did against the Hungarians, they lost out by five goals to one.

The winners of nine preliminary round groups will progress directly to a qualifying group stage, while nine runners-up and five best third-placed teams will enter qualifying play-offs.

There is still an outside chance Northern Ireland could reach the qualifying play-offs as one of the best third-placed teams if they defeat Turkey in their third and final game of the week, but it looks likely results in other groups will work against them.

Turkey and Northern Ireland are currently propping up Preliminary Round Group E with no points from two matches. They meet in the Jonava Arena tomorrow (1 February).

In the match against the Lithuanians the hosts scored first through Albert Voskunovic in the third minute.

Just over a minute later, however, Northern Ireland netted through Chris Donnelly.

The scores were level for just five seconds, Lithuania scoring from the restart when Voskunovic pounced once again.

Northern Ireland piled forward though with Donnelly, Scott Gunn, Connor Millar, Josh Lowry and Jordan Wilson all having attempts before Aurimas Skurdelis had an effort blocked.

Lithuania extended their lead in the 12th minute. Vladimir Derendiajev played in Voskunovic and he duly slammed the ball home to complete his hat-trick.

Towards the end of the first half the hosts created a handful of chances but the boys in green and white held firm.

After the break the Lithuanians pushed forward again and created a few opportunities before Gunn had an effort blocked and Millar’s strike was kept out by Lithuanian keeper Ernestas Macenis.

On 27 minutes Derendiajev hit the woodwork but seconds later Macenis sent Lukas Sendzikas clear and he made it 4-1.

Further chances were created by both sides before Sendzikas completed the scoring in the 33rd minute.

In the closing stages Northern Ireland carved out five opportunities but they failed to score.