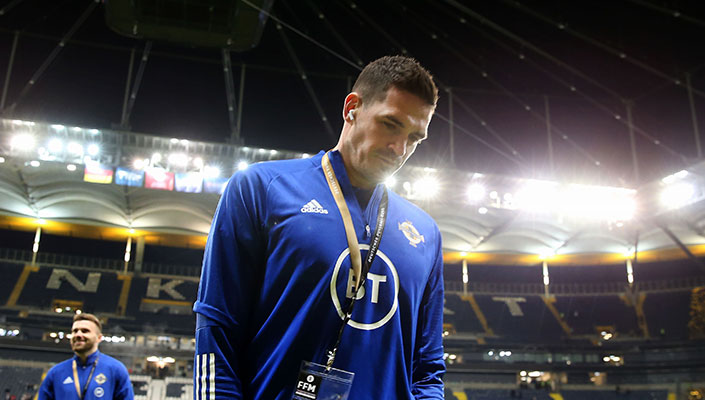 Striker Kyle Lafferty made his debut for his new club Sunderland at the weekend as the Black Cats recorded a 1-0 win over at MK Dons in League One.

Manager Phil Parkinson, who dropped Lafferty’s International colleague Will Grigg from his 18-man squad, brought the Enniskillen-born forward on for the final 13 minutes of Sunderland’s third successive victory.

After the game Parkinson admitted it was a straight choice between Grigg and Lafferty as to who would be on the substitute’s bench at the Stadium MK.

“It was just a call between Lafferty and Grigg,” stated the Black Cats boss. “I felt Lafferty just coming into the club may just have that spring in his step.

“Grigg has trained well and he was great in the dressing room before and after with the boys, congratulating everybody.

“It is always tough when you have to make a call like that but you can only pick seven subs.”

On the goalscoring front, in-form striker Kyle Vassell was once again on target as he headed home his fifth goal in as many games as Rotherham United consolidated their place at the top of League One with a comfortable 3-0 win over Bristol Rovers.

Elsewhere in the division, Dion Charles chalked up his seventh of the season as Accrington Stanley slipped to a third straight defeat following a 2-1 loss at home to struggling Southend United.

In League Two, Michael O’Connor celebrated his Salford City debut by hitting the winner against Forest Green Rovers on Saturday.

Speaking to the club website he said: “He’s only been in this week and it was a tough decision to bring him in to the team with how well Jack [Baldwin] has played in the previous two games, but we’ve brought Michael in for his nous and his influence on the other players around him.”

Also making their debuts over the course of the weekend were former under-21 International Dale Gorman, who is on-loan at Newport County and another loanee Ciaron Brown who played the full ninety minutes for Livingston in their 3-1 Scottish Cup success against Raith Rovers.

After missing the last eleven games with a hamstring injury striker Josh Magennis made a welcome return to action in Hull City’s 1-0 defeat at Derby County in the Championship.

Meanwhile, in Scotland Jordan Jones played in Rangers 2-0 Scottish Cup win over League One Stranraer after being sidelined for the last four months with a knee injury.

Finally, there were assists for Wycombe Wanderers striker Paul Smyth and Caolan Lavery of Walsall.